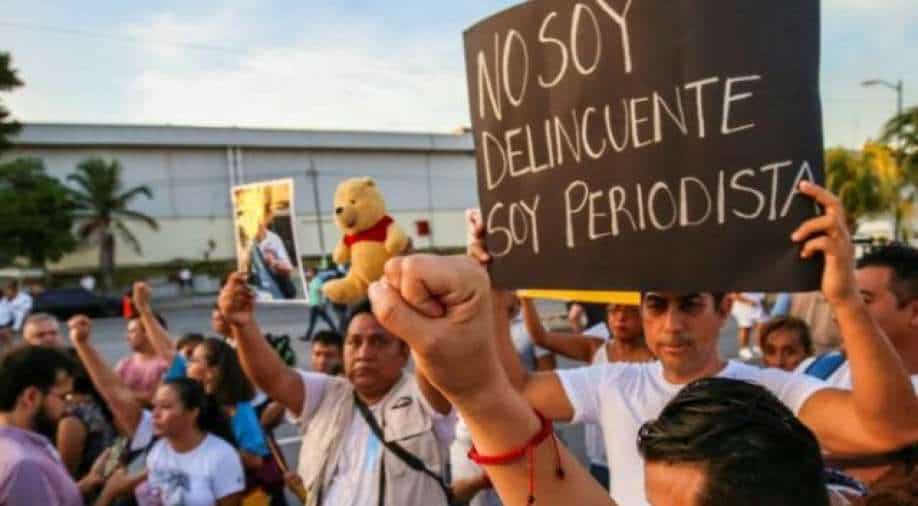 Journalists protest against the murder of one of their colleagues in Mexico Photograph:( AFP )

According to United Nations, 55 journalists and media professionals were killed in 2021, with nearly nine in 10 killings since 2006 still unresolved.

The latest incident of an exiled Pakistani-born blogger claiming that the Pakistani government and Army is targeting him for speaking out against them has joined the growing list of targeted journalists who are hunted by the state.

In fact, in the last year, the situation has become worse for journalists across the world.

According to United Nations, 55 journalists and media professionals were killed in 2021, with nearly nine in 10 killings since 2006 still unresolved.

In 2020, according to the non-governmental organisation Reporters without Borders (RSF), around 40 of the 50 journalists who died in 2020 were the victims of targeted killings.

What does the UN report say?

According to the report, in 2021, as in previous years, journalists faced high rates of imprisonment, physical attack, intimidation and harassment, including when reporting on protests.

Women journalists continue to be particularly at risk as they are subjected to “a shocking prevalence of harassment online”, UNESCO said, citing their data which showed that nearly three-quarters of female media professionals surveyed had experienced online violence linked to their work.

According to the UNESCO Observatory of Killed Journalists, two-thirds of victims in 2021 died in countries where there is no armed conflict.

Most deaths in 2021 occurred in just two regions, Asia-Pacific–with 23 killings, and Latin America and the Caribbean–with 14.

Europe had six journalists killed, while the Middle East and Arab countries had just one.

The year 2021 also saw a crackdown on journalists.

In terms of country-wise statics, Mexico continued to be the most dangerous place for journalists. It has reported 47 targeted killings.

At the second pace is Afghanistan, where 47 journalists were executed.

Then comes Yemen, Iraq and Pakistan, where the tally stands at 18,17 and 16, respectively.

According to a new report from the non-profit Committee to Protect Journalists (CPJ), the number of journalists behind bars reached a global high in 2021.

CPJ said 293 reporters were imprisoned worldwide as of December 1 this year.