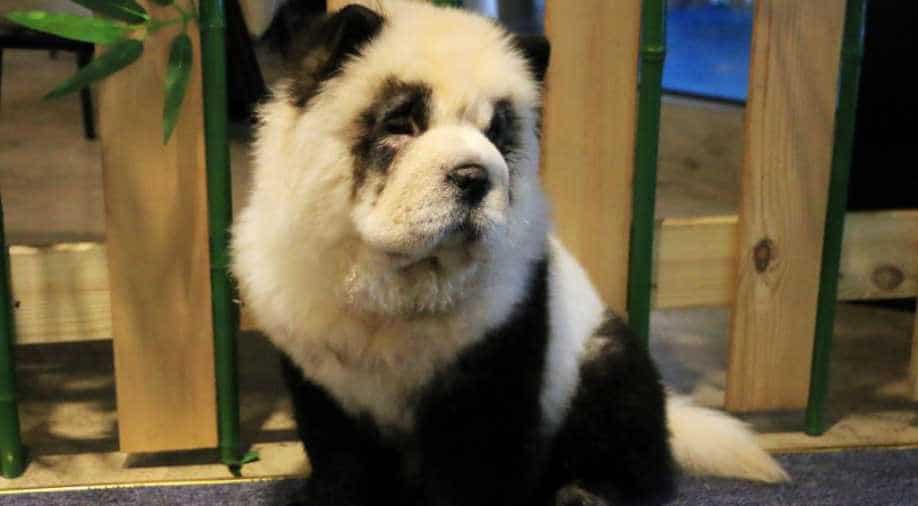 A Chow Chow dog dyed in the likeness of a giant panda is pictured at a pet cafe in Chengdu, Sichuan province, China October 27, 2019. Photograph:( Reuters )

Animal rights activists argue that artificial dyes pose damage to the skin and fur of these animals.

A pet cafe in China has raked up controversy after its owner put on dye on his dogs for them to resemble giant pandas.

Animal cafes have been coming up across the world where pet lovers can enjoy a meal alongside the company of their furry friends.

The pet games cafe which opened last month in Chengdu, South-Western China went a step ahead to retain its popularity. The cafe is home to six Chow Chow dogs that have been painted black and white to look like pandas.

The move was initiated to invite more visitors to the cafe but has triggered a heated debate online over the improper treatment of animals.

The hashtag "dye a dog into a panda for 1500 yuan" had gone viral with more than 170 million views on China's Twitter-like Weibo platform.

Animal rights activists argue that artificial dyes pose damage to the skin and fur of these animals.

However, the owner of the cafe maintains that the dye used on the dogs is harmless and only adds to the fun of the visitors.

Dyeing pets became a full-blown craze in China in the early 2010s, initially for competitions but thereafter amidst a domestic wave of "extreme dog pampering".