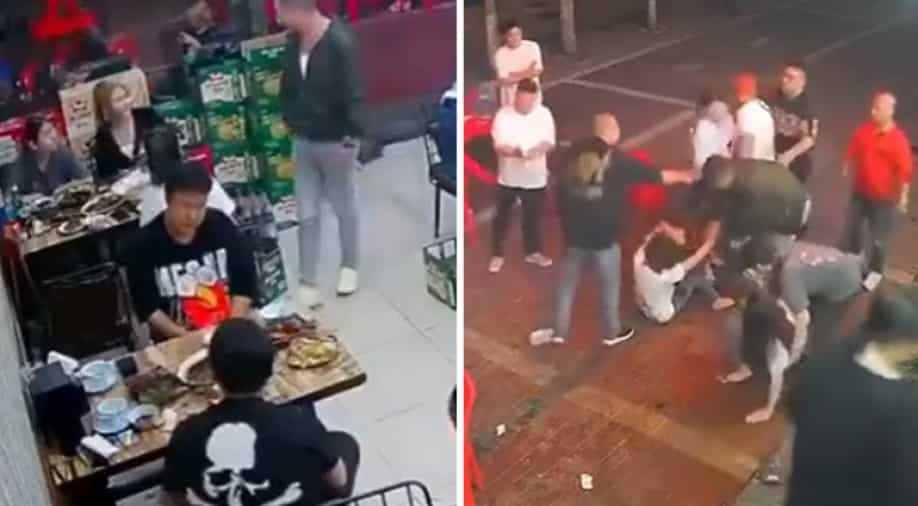 Footage circulated online shows a man striking a woman before others drag her outside Photograph:( Twitter )

In a case that has sparked outrage over predatory sexual behaviour, Chinese police has arrested nine people for a vicious attack on a group of women at a restaurant.

A man can be seen placing his hand on a woman's back as she shares a meal with two companions at a barbecue restaurant in northern China's Hebei province according to footage of the incident which is being widely circulated online.

The man strikes her when she tries to push him away and his companions drag her outside and deal a barrage of blows as she lies on the ground.

When the woman's friend tries to stop the men she is also knocked to the floor, triggering outrage about sexual harassment and gender-based violence in China where the conversation around women's rights has grown in recent years.

Following the incident, the two women were hospitalised as they had sustained several injuries but authorities said they are "in stable condition and not in mortal danger."

"The case is being further investigated" according to police in Tangshan city which has arrested nine people on suspicion of violent assault and "provoking trouble".

Urging authorities to crack down on violence against women, netizens slammed predatory behaviour and asked for harsh punishment.

In a shocking case, a Chinese man was sentenced to death last year after murdering his ex-wife as she live-streamed on social media.

After a wave of women accused university professors of sexual harassment in 2018, web censors blocked keywords linked to the #MeToo movement.