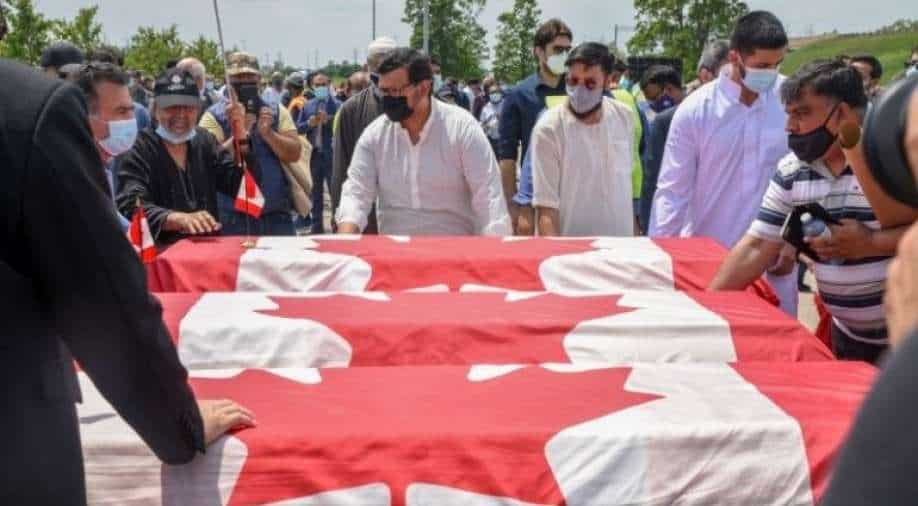 People transport three flag-wrapped coffins at the funeral of the Afzaal family that was killed in what police describe as a hate-motivated attack, at the Islamic Centre of Southwest Ontario, in London, Ontario, Canada Photograph:( Reuters )

Four members of the Afzaal family, a man and his wife, their teenage daughter and his mother, were out for a walk in their London, Ontario neighborhood when a truck driver drove into them on purpose, according to authorities

Canadian authorities have charged the suspect behind an attack in which a Muslim family was mowed down by a pick-up truck with terrorism, prosecutors said Monday in court.

Four members of the Afzaal family, a man and his wife, their teenage daughter and his mother, were out for a walk in their London, Ontario neighborhood when a truck driver drove into them on purpose, according to authorities.

Nathaniel Veltman, 20, had already been charged last week with four counts of premeditated murder and one of attempted murder. The attack was denounced as a "terrorist" act by Prime Minister Justin Trudeau.

Canadian Deputy Prime Minister Chrystia Freeland reacted to the new charges afterward, saying: "It is really important for us to name it as an act of terror ... and it is important for us identify the terrible threat that white supremacism poses to Canada and to Canadians."

The attack sparked outrage across Canada, with politicians from all sides condemning the crime, spurring growing calls to take action to curb hate crime and Islamophobia.

People in London, Ontario marched about 7 kilometers (4.4 miles) from the spot where the family was struck down to a nearby mosque, the site close to where Veltman was arrested by police.

Some carried placards with messages reading 'Hate has no home here', 'Love over hate'. Similar events were held in other cities in Ontario, Canada's most populous province.

It was the worst attack against Canadian Muslims since a man gunned down six members of a Quebec City mosque in 2017.

So far, few details have emerged that would shed light on why police say it was a pre-meditated, hate-motivated crime. Veltman is due in court again on June 21.