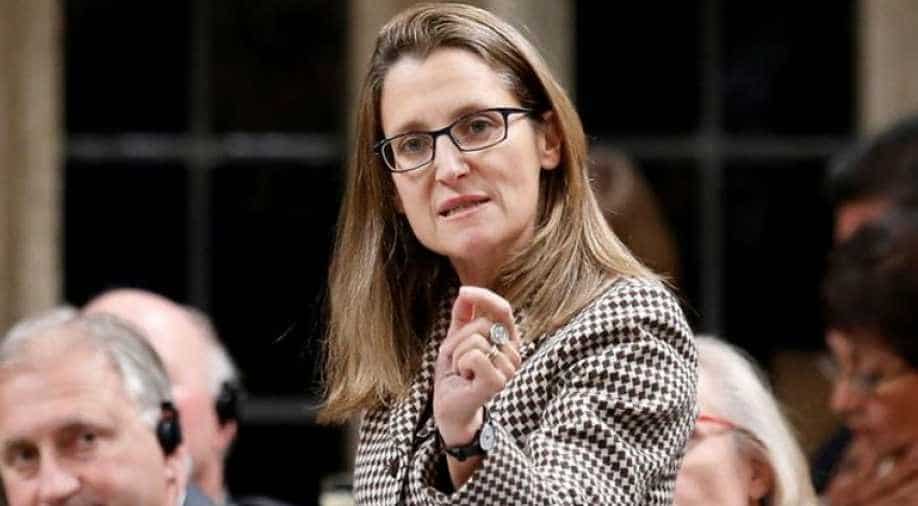 Canada's new foreign affairs minister Chrystia Freeland has rejected an offer from Russia to lift their travel ban against her, if Canada removes economic sanctions imposed over Russia's annexation of Crimea, the Globe and Mail reports.

Chrystia Freeland, who is of Ukrainian descent and fluent in Russian, was made Canada's top foreign diplomat as part of a major cabinet shuffle by Prime Minister Justin Trudeau. Freeland worked in Moscow as a financial journalist, and is a strong supporter of Ukraine.

Canada's previous Conservative government had blacklisted many Russian officials to punish the country for its Crimea action. Russia then banned Freeland, an opposition leader in Parliament, including several parliament members as part of retaliatory sanctions. After Moscow imposed sanctions on her, Freeland posted on Twitter at the time declaring it “an honour to be on Putin’s sanction list."

“There is no quid pro quo for aggression and illegal action on their part,” Freeland’s communications director Joe Pickerill told The Globe and Mail, one of Canada's largest newspapers.

Russia on its part has been working through various channels in trying to convince foreign governments to waive the sanctions. According to The Globe and Mail, Russian news agency Sputnik quoted an unidentified Russian Foreign Ministry official as saying the Kremlin was open to allowing Freeland to travel to Russia, but only if Canada lifted economic sanctions and travel bans against Russia.

Canada has however decided to stick to its stand. Soon after being sworn in as foreign affairs minister, Freeland told reporters whether she will be able to travel to Russia was not up to her.

“That’s a question for Moscow,” she told reporters. “I am a very strong supporter of our government’s view that it is important to engage with all countries around the world, very much including Russia.”

Freeland's appointment to the foreign affairs post is being seen as a bold move by the current Trudeau government, given the fact that US President-elect Donald Trump has repeatedly praised Putin, is set to take over the presidency on January 20. The incoming US president might remove US sanctions, which would potentially leave Canada in a difficult situation.

However, the Trump administration may maintain sanctions on Russia in the near future, as Trump’s nominee for secretary of state, Rex Tillerson said during his Senate confirmation hearing that he would recommend maintaining "status quo" on Russia.

But Tillerson has raised alarm bells among Democrats and Republicans for his various ties to Russia, including being CEO of ExxonMobil while the company found billions of dollars worth of oil in northern Russia, and personally being awarded the "Order of Friendship" award by none other than Vladimir Putin.

Trump himself has praised Putin for months, even after allegations released only yesterday that the Kremlin has "compromised" Trump by gaining personal and financial information over him.

In a press conference after the explosive story broke, Trump conceded for the first time that he believes it was Russia who hacked the Democrats' computers ahead of the election. However, Putin, he said, "should not be doing it. He won't be doing it. Russia will have much greater respect for our country when I am leading it than when other people have led it".

On October 19, during a Presidential debate on live television, Donald Trump explicitly encouraged the Russians to hack his rival, Hillary Clinton.

"Russia, if you're listening, I hope you're able to find the 30,000 emails that are missing", he said, referencing Clinton's email.