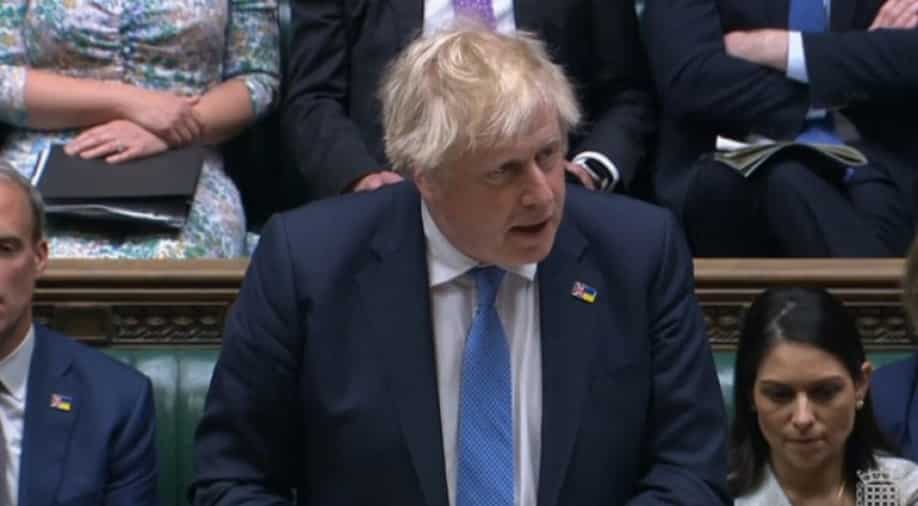 A video grab from footage broadcast by the UK Parliament's Parliamentary Recording Unit (PRU) shows Britain's Prime Minister Boris Johnson apologising to MPs for the "partygate" fine in the House of Commons, in London Photograph:( AFP )

Johnson has been under intense pressure since it was revealed that Downing Street threw booze parties during the period when a three-tier lockdown had been imposed in London.

The scandal was dubbed 'partygate' by the British media after footage of the parties was leaked and went viral on social media.

The Metropolitan Police found Johnson guitly of violating the COVID-19 guidelines and imposed a fine on him. He became the first British leader to be penalised for breaking the law.

During his first address to the British parliament since paying the fine, Johnson said, ''I take this opportunity on the first available sitting day to repeat my wholehearted apology to the House (of Commons).''

''As soon as I received the notice, I acknowledged the hurt and the anger, and I said that people had a right to expect better of their Prime Minister.''

"It did not occur to me then, or subsequently, that a gathering in the Cabinet Room just before a vital meeting on COVID strategy could amount to a breach of the rules. I repeat that was my mistake, and I apologise for it, unreservedly," he added.

However, Kier Starmer, leader of the UK's Labour Party, called his apology a joke and added that the ''British people do not believe him anymore.''

''This isn't a fixable glitch in the system. It is he who he is and he can't change.''

''He should bring decency, honesty, and integrity back into our politics and stop the denigration of this country," he added.

The Labour Party has asked Johnson to quit for the sake of integrity in politics.

As a result of the controversy, Johnson's approval rating has plummeted with a recent national survey suggesting approximately two-thirds of the public spoke negatively about Johnson.

"Fury has not receded. Many negative comments are by people who liked him previously but have now changed their minds."