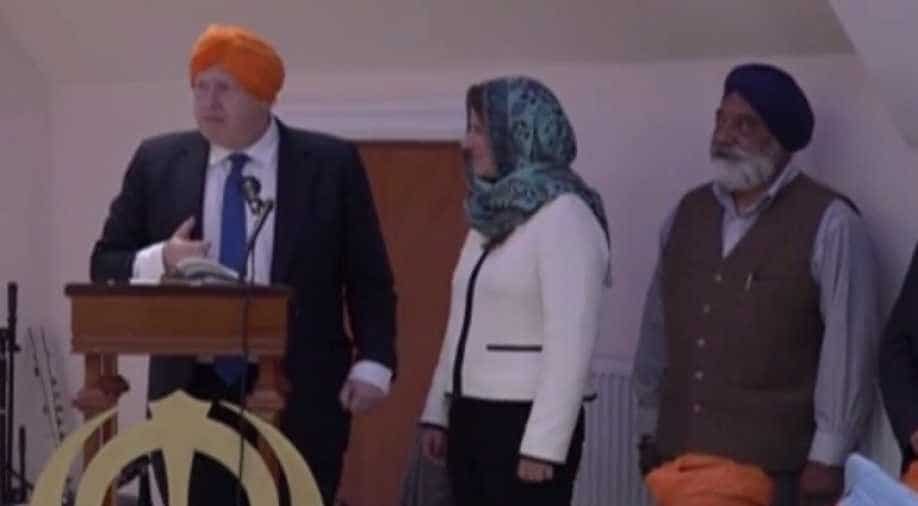 Boris Johnson came under fire during his speech at a Bristol gurudwara on Wednesday. (Image courtesy: South West News Service) Photograph:( Others )

Sikhism eschews consumption of liquor, but a seemingly unaware Johnson made a pitch for ending trade tariffs on whisky to boost exports.

His campaign speech on behalf of British Prime Minister Theresa May was immediately shot down by an irate Sikh woman, who chastised him for being ignorant about the religion's values, according to a BBC reporter.

She's absolutely livid. Boris Johnson apologises. "How dare you talk about alcohol in a Sikh temple."

The former London mayor's slander didn't end there as he responded to the woman by claiming to know several Sikhs who consumed alcohol.

While several Sikhs do drink, their religion has always advised shunning of alcohol. Publicly mentioning that some Sikhs do enjoy liquor also angered some religious groups in the United Kingdom.

Batting for the Tories, Johnson -- viewed as a maverick and a weak link by some in his own party -- dropped the political clanger during his speech at the Bristol-based Nirman Sewak Jatha to woo the large Sikh community: "What are the consequences of having so many Sikh relatives, and I hope I am not embarrassing anybody, is that whenever we go to India, to Mumbai or to Delhi, we have to bring 'clinkie' in our luggage.

"But imagine what we could do if there was a free trade deal with India - which there will be. You are talking hundreds of millions of pounds of new exports and more exports is great for a fantastic export city like Bristol."

To this, a woman named Balbir Kaur immediately chided the senior politician standing in front of the altar at the gurudwara (a Sikh temple).

"You have just said that the main objective is to get the trade between India and England and the basis of that is alcohol which is in Sikhism against our religion so I wouldn't be wanting to put somebody in power who wants to put more alcohol in India which is causing lots of problems at the moment.

"I am a practising Sikh and to me that is absolutely outrageous."

Her anger did not end there.

A BBC recording revealed that when Johnson was asked to talk about inheritance tax, the woman piped in again.

"Inheritance tax is not an issue - alcohol is.

"I'm sorry if I am shouting but it is very important to me.

"It's not my family circumstances, it's the whole of Sikhism and you are standing in a Sikh Gurdwara and talking about alcohol - it's not right."

Jonson's blunders kept flowing, this time his team being the guilty party.

Johnson, during the sppech at the gurudwara, did apologise for dredging up the tabooed topic for Sikh followers.

But the apology got lost in the subsequent debris of clarification provided by Johnson's team.

Daily Mail quoted Johnson's spokesperson as saying: "He was simply making the point that a free trade deal with, for example, India could be huge for both sides.

"He pointed out that in India billions of litres of whisky are consumed every year but there is tariffs at 120 per cent on imports of Scotch whisky and wouldn't it be great if we could have free trade.

"One lady expressed her views based on a personal situation but the other 30 attendees warmly welcomed his remarks."

Johnson came under attack by various Sikh groups as well.

Sikh Federation (UK) general secretary Bhai Narinderjit Singh slammed the 52-year-old politician: "No politician in his right mind would speak in a Gurdwara about a trade deal involving alcohol.

"It is a requirement that Sikhs should not consume any intoxicants."

Sikhism frowns upon consumtpion of alcohol. Sikh gurus (leaders) have always advised their followers -- both baptised and non-baptised -- to abstain from liquor.

@SimsonPete Hi Pete. You may wish to share this short video to educate those who think alcohol is not against the Sikh faithhttps://t.co/jb2a8jq7GB

Orange is the new white pic.twitter.com/lSgFDijsOw

New CEO says that FTX had 'complete failure' of controls

What happened when NATO's Article 5 was invoked last time?