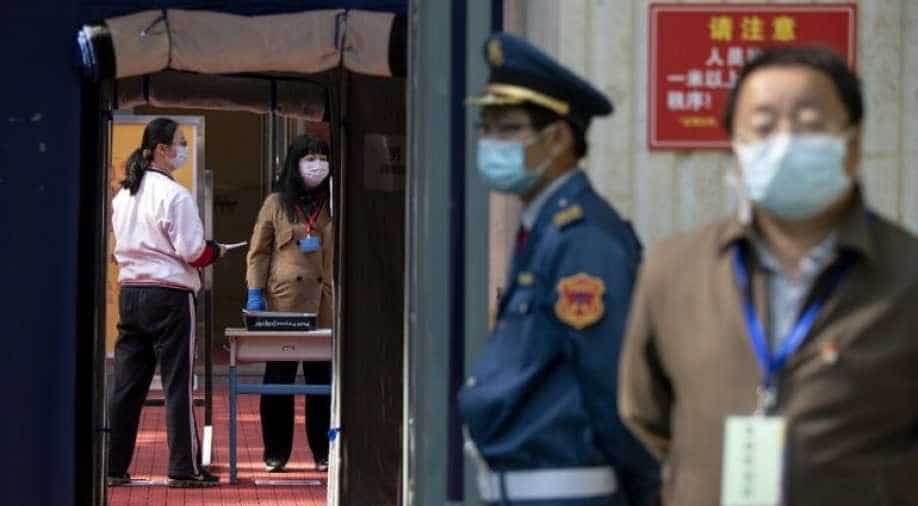 A student (L) wearing a face mask amid concerns of the COVID-19 coronavirus arrives at a middle school in Beijing on May 11, 2020 Photograph:( AFP )

As China resumes to normalcy, Shulan is now the only Chinese city to have such a high pandemic response rating

The Chinese city of Shulan has imposed martial law after 11 fresh cases of coronavirus. The city borders North Korea and fears a second wave of the killer virus.

According to state media like Global Times, all new cases were transmitted by a laundrywoman.

The secretary of the Jilin Provincial Committee of the Communist Party of China, Bayin Chaolu called for the imposition of martial law while stressing on the need to ensure “highest-risk level prevention and control”.

Chaolu further claimed that the fresh cluster poses a grave danger to public health, and displays the shortcomings in dealing with the virus. Local media claims that action will be taken against those who did not take appropriate measures.

As China resumes to normalcy, Shulan is now the only Chinese city to have such a high pandemic response rating.

Over the weekend, Shulan intensified its lockdown efforts by imposing it across villages, and by blocking the entry and exit points. All visitors are being monitored, and only one door has been put in place for local residents.

Additionally, only one person per family is permitted to buy essentials everyday.

As of now, no trains are plying to and from Shulan. Furthermore, public transport services have been halted. No taxis are allowed to leave the city, which is home to over 630,000 people.

This raises the questions about the resurgence of COVID-19, as countries around the world start to relax their versions of lockdowns. China too, had recently lifted restrictions with the declining number of cases.

The province of Hubei reported a fresh coronavirus case yesterday, with the country’s tally of fresh cases now at 14. As of now, over 82,901 have been infected in the country so far, with over 4,630 deaths.

China’s National Health Commission (NHC) data claims that out of these 14, 12 cases were transmitted domestically. 11 alone were reported from Jilin province which houses Shulan.

For 35 days, the initial epicentre of the outbreak, Hubei had remained free of the virus but reported a new case yesterday.

Jilin is situated across the China-North Korea border.

China is now tracing asymptomatic cases. Just on Saturday, over 20 cases without symptoms were identified. So far over 794 people have been placed under observation.

The data suggests that Hubei alone has over 600 asymptomatic cases, the highest number in the country.

'How could they be that cruel and heartless?': Uyghurs in China given long prison sentences