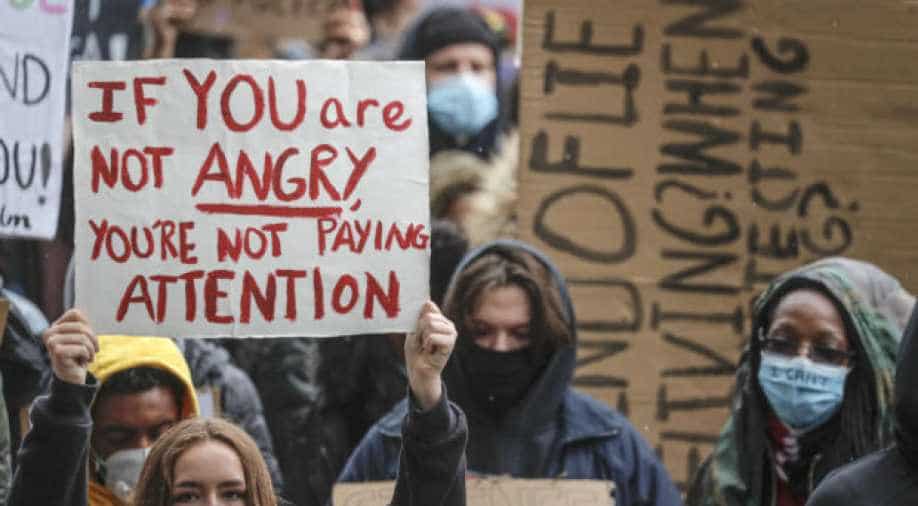 A separate sign -- 'Don't Be A Bunker Boy' -- was a reference to reports that Trump went into the White House bunker when protests in Washington got more violent.

About a 100 protestors gathered at US President Donald Trump's golf resort just outside Miami, on Saturday, in solidarity with the 'Black Lives Matter' movement.

The protest was organised by Latinos -- in which many carried signs that said 'Vote Him Out'.

A separate sign -- 'Don't Be A Bunker Boy' -- was a reference to reports that Trump went into the White House bunker when protests in Washington got more violent.

Several hundred people also gathered in downtown Miami for a march with plans for a bigger rally later in the day. The march was peaceful and led by a pastor who read Bible verses before everyone set out.

George Floyd's death on May 25 -- at the hands of a white police officer who knelt on his neck for almost nine minutes -- has become the latest flashpoint for rage over police brutality against African Americans, propelling the issue of race to the top of the political agenda ahead of the US presidential election on November 3.

US President Donald Trump on Friday criticised protestors who resorted to kneeling down during the national anthem, after NFL quarterback Drew Brees apologised for remarks he made about the practice.

The kneeling pose, popularised by NFL quarterback Colin Kaepernick, has become a symbol of the fight for racial justice in the United States.

The protests have since reached other countries and continents.

In the United States on Friday, prominent Democratic politicians adopted the slogans of the protests and announced reforms, as tensions remained high in major cities after days of largely peaceful protests that saw sporadic violence.

Protestors in Canada chanted "Stand up to Trump!" to Prime Minister Justin Trudeau as he joined thousands at an anti-racism rally on Friday and knelt alongside them thrice -- a gesture used to protest against police brutality and the treatment of African-Americans by police.

Thousands took to the streets across Australia on Saturday, as did hundreds in Japan and South Korea to support US protests against police brutality.

Asia-Pacific demonstrations, however, were limited by social-distancing curbs aiming at stopping the novel coronavirus pandemic.