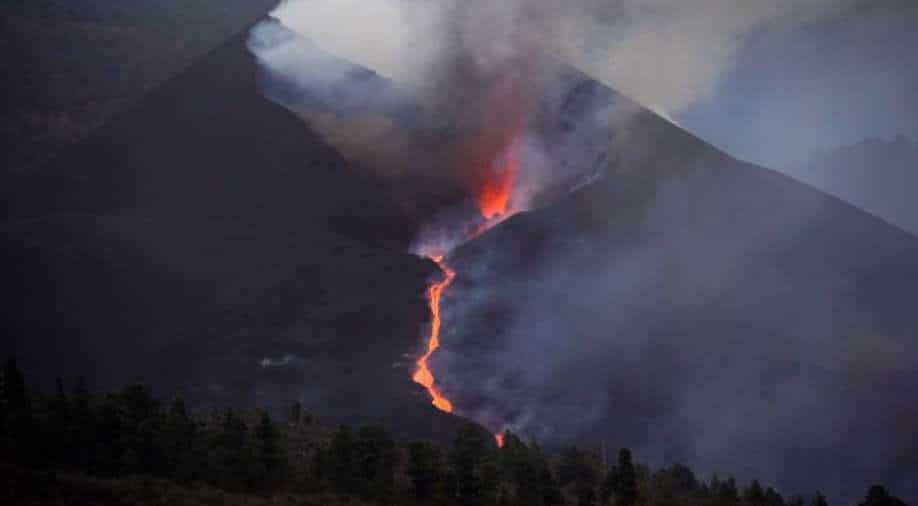 This is a file photo, which shows lava blocks the size of buildings falling from La Palma volcano. Photograph:( Reuters )

Spain on Saturday (December 25) announced that the eruptions of the Cumbre Vieja volcano in Canary Island were officially over. The information came three months after it began spewing rivers of molten rock and ash into the air. "It lasted 85 days and 18 hours," Julio Perez, who is a director of the Canary emergency volcanic response, said at a press conference.

Due to a quick response and rapid evacuation, the volcanic eruption did not cause injuries or deaths. However, it destroyed 1,345 homes, as well as schools, churches, health centres and farm irrigation infrastructure.

After the volcanic eruption on the Spanish island of La Palma showed first signs that it might be coming to an end, members of Spain's Military Emergency Unit (UME) measured toxic gases near homes, clearing the way for more residents to return.

The eruption of the Cumbre Vieja volcano began on September 19 dramatic footage showed how it sent rivers of molten rock down its slopes, forcing the evacuation of over 7,000 people.

The eruption was the longest on record on the island and the slow-moving lava covered over 1,200 hectares of land. It even made its way to the Atlantic.

Island's banana plantations and tourism have been suffered a massive impact and as per the regional government, the eruption caused at least €900 million in damages.

Spanish Prime Minister Pedro Sanchez, who visited La Palma several times during the eruption and has pledged to help La Palma rebuild after the disaster, described the news as "the best Christmas present."

"We will continue working together, all the institutions, to relaunch the wonderful island of La Palma and repair the damage caused," Sanchez tweeted on Saturday.

His government has so far promised €225 million in aid funding to recovery efforts, including buying temporary housing and providing financial assistance to people who lost their jobs.