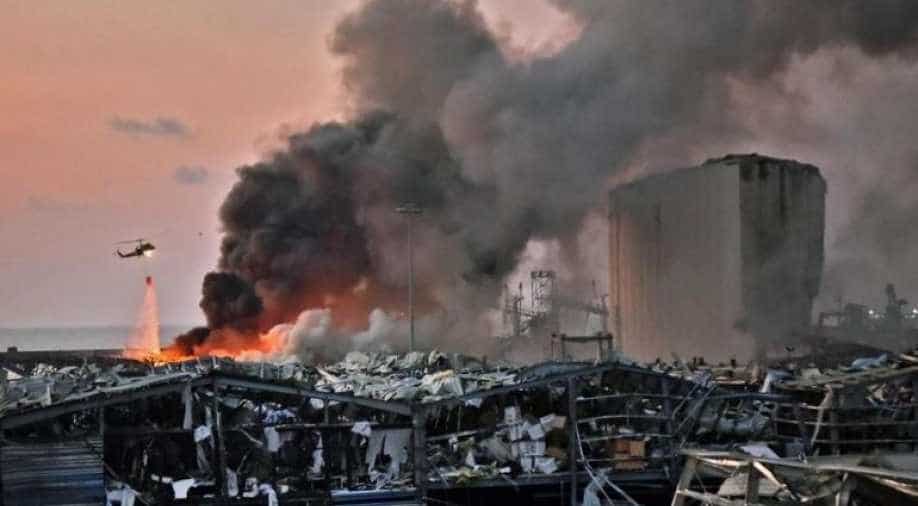 On August 4, 2020. Hundreds of tonnes of Ammonium Nitrate exploded in Beirut port. The huge blast killed more than 200 people and injured thousands

A judge investigating last year's devastating Beirut port blast said on Friday that he had summoned the outgoing premier and has taken steps towards indicting former ministers and security officials.

On August 4, 2020. Hundreds of tonnes of Ammonium Nitrate exploded in Beirut port. The huge blast killed more than 200 people and injured thousands. Swathes of Lebanon capital were ravaged in the blast

After the blast, it came to light that the officials had knowledge for years that explosive substances were stored unsafely at the Beirut port.

The slow pace of the investigation has sparked outrage at home and fuelled distrust among international donors.
Tareq Bitar in February became the second judge to probe the explosion following a court order removing his predecessor, who had issued charges against prime minister Hassan Diab and three former ministers over the blast.

Bitar on Friday told a small group of journalists, including one from AFP, that he had summoned Diab, who is still indicted in the case.

Bitar said he would be looking at possible charges of "probable intent to murder" and "negligence", as the officials "did not take measures to avert the risk of an explosion".

But Khalil and Zaiter managed to get a court to remove Sawan in February, arguing that the indictment of a lawmaker needed parliament clearance.

Bitar said he has requested that parliament lift the immunity of lawmakers Khalil, Zaiter and Machnouk.