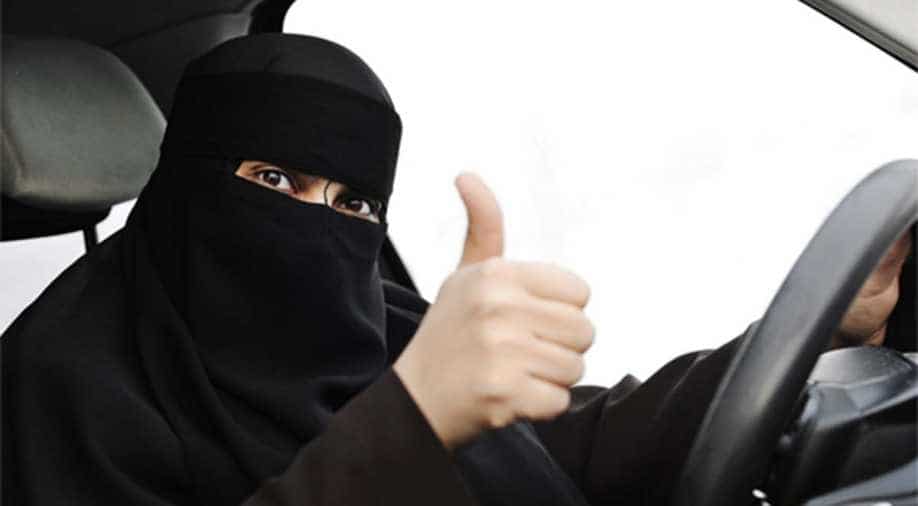 The attitudes of Saudi men have prompted fears among some women that they will struggle to get licences or could be deliberately failed in driving tests. Photograph:( AFP )

With many carrots and some sticks, ultra-conservative Saudi Arabia seeks to tackle entrenched male attitudes towards women drivers before millions take the wheel, many for the first time, next June.

For decades, hardliners cited austere Islamic interpretations to justify the ban on women, with some maintaining that they lacked the intelligence to drive and allowing them to do so would promote promiscuity.

The ban finally ended last week, but many women fear they are still easy prey for conservatives in a nation where male "guardians" have arbitrary authority to take decisions on their behalf.

As head of my family, I make the decisions -- not the women'

"You can revoke the ban, but you cannot force men to allow their sisters and wives to drive," said a Saudi man with a private taxi company in Riyadh, declining to be named.

"As head of my family, I make the decisions -- not the women," he told AFP, expressing an aversion to his wife driving as that would mean more contact with unrelated men.

Such views are hardly an anomaly in the gender-segregated kingdom, despite Crown Prince Mohammed bin Salman's stunning reform push that has sought to liberalise the kingdom and add more women to the workforce.

"Expect more accidents" because of women drivers, remarked one Saudi, echoing an avalanche of sexist comments on Twitter.

Saudi authorities last week arrested a man who threatened a violent backlash against any female driver whose car breaks down.

"I swear to God, I will burn her and her car," the man, wearing a traditional white robe, said in an online video.

Such attitudes have prompted fears among some women that they will struggle to get licences or could be deliberately failed in driving tests.

The government has preemptively addressed such concerns, with the interior ministry pledging to enforce the law by any means necessary.

Authorities are also moving to criminalise sexual harassment with a new law, with flogging and jail terms as possible penalties.

The Saudi media is also taking on conservative opposition -- with a dash of humour.

"Driving has always been a minefield in the battle of the sexes... Sorry fellas but women are the better drivers," declared a recent graphic published in the English-language daily Arab News, citing research that male drivers are involved in more accidents.

Newspaper editorials have argued that if women were allowed to ride camels in the time of the Prophet Mohammed then they should be allowed to drive "modern-day camels" —- cars.

Others have highlighted the economic benefits of the reform; Saudi families would no longer need foreign chauffeurs, often a major source of financial strain.

But authorities are careful not to antagonise the sensitivities of hardline clerics.

The Council of Senior Scholars, the kingdom's highest religious body that is close to the royal family, announced the majority of its members found that lifting the ban was "permissible".

Experts say their approval —- after decades of opposition —- symbolises the government's tightening grip on the religious establishment that has long dominated Saudi politics.

"It's unlikely that the scholars who consistently maintained that driving would damage ovaries, deprive (women) of their virginity and integrity had a sudden epiphany that their decades-old beliefs were wrong," said James Dorsey from Singapore's S. Rajaratnam School of International Studies.

When the ban was lifted, several women's rights activists who long fought it alleged that authorities warned them not to make any public comments —- seemingly not to highlight that activism can lead to reform.

The government denies the claim.

Ali Shihabi, from the Washington-based think tank Arab Foundation, said on Twitter that the government did not want activists to "further provoke the conservatives who were already provoked by (the) driving decision".

The decision was led by Prince Mohammed, who styles himself as a reformer who will set the country on the road to modernity and civil liberty.

But some experts have called the decision pure tokenism until the kingdom dismantles its rigid guardianship system.

"It may take many years for Saudi society to fully accept a greater role for women."

A Saudi executive at a multinational company in Riyadh said the main obstacle remains a prevailing "village mentality", although some patriarchs prefer having women drive themselves than be chauffeured around by unrelated men.

"Women drivers will become a new normal and then people will say: 'How come we didn't allow this to happen sooner?'"