At least 13 dead in car bomb in Syrian border town 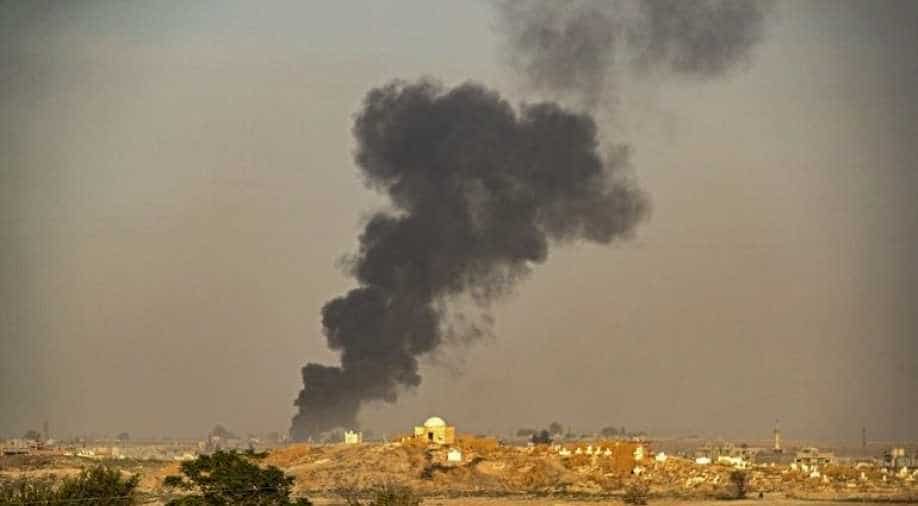 The bombing ripped through Tal Abyad, one of several once Kurdish-controlled towns seized by Turkey last month in a deadly cross-border offensive.

A car bomb killed at least 13 people in a Turkish-held border town in northeast Syria Saturday, as thousands of Kurds in the wider region protested against "Turkish occupation".

The bombing ripped through Tal Abyad, one of several once Kurdish-controlled towns seized by Turkey last month in a deadly cross-border offensive.

The blast came despite a truce last week to halt the Turkish assault that began on October 9 and sparked the latest humanitarian disaster of Syria's eight-year war.

On Saturday, an AFP correspondent in Tal Abyad saw the remains of two motorbikes ablaze in the middle of a rubble-strewn street.

A group of men carried the severely burnt body of a victim onto the back of a pickup truck, as a veiled young woman stood aghast by the side of the street.

Turkey's defence ministry said 13 civilians were killed in the attack, which it blamed on Kurdish fighters.

The Syrian Observatory for Human Rights, a Britain-based war monitor, reported 14 people -- pro-Ankara fighters and civilians -- had been killed in the explosion.

"To displace true owners of the land and to settle Syrian refugees in Turkey to their homes in NE Syria, the Turkish army and its proxies are now creating chaos in Til Abyad by explosions targeting civilians," Mustafa Bali, a spokesman for the Kurdish-led Syrian Defence Forces tweeted.

"Turkey is responsible for civilian casualties in the region it controls," he said.

Meanwhile, in the Kurdish-majority city of Qamishli, thousands of Syrian Kurds marched in the streets to protest what they view as a Turkish invasion.

"No to Turkish occupation," they cried, brandishing flags of their once semi-autonomous region and its fighters.

In the German capital Berlin, the police said around 1,000 people protested to "stop the war" against the Kurds, while hundreds in Paris called for sanctions against Turkey.

It hands a 120-kilometre-long (70-mile-long) stretch of borderland including Tal Abyad over to Turkey and provides for joint Russian-Turkish patrols along with other parts of the frontier -- the first of which started on Friday.

Ankara views Syrian Kurdish fighters as "terrorists", and wants to expel them from areas along its southern border.

But Turkey also hopes to resettle there some of the 3.6 million Syrian refugees it hosts on its own soil.

The Turkish attack last month came after US President Donald Trump said he had ordered US troops to leave northern Syria.

But on Saturday, US troops visited Kurdish forces in Qamishli in the second such spotting of American forces in northeastern Syria since that announcement.

Tan armoured vehicles flying the American flag pulled up at the headquarters of the Kurdish-led Syrian Democratic Forces, the de-facto army of Syria's Kurds.

The SDF have been a key US partner in fighting the Islamic State jihadist group, backed by airstrikes by a US-led coalition.

A source who attended a meeting with the Americans on Saturday said they wanted to return to set up a military post in Qamishli.

The US withdrawal was largely seen as a betrayal of its Kurdish partners, who were forced to seek help from the Russia-backed Damascus regime to contain the Turkish attack.

In an interview published Saturday, SDF commander-in-chief Mazloum Abdi said he distrusted both the Syrian government and Russia, but had no other choice but to work with them.

"We have no confidence, but it's not possible to solve Syria's problems without using the political path. We must negotiate," he told Italy's La Repubblica newspaper.

The SDF expelled IS jihadists from their last patch of territory in Syria in March.

But the extremists continue to claim deadly attacks in SDF-held areas, and this week they announced they had a new leader after their former chief Abu Bakr al-Baghdadi was killed in a US raid.

After years of war against IS, the SDF guard around 12,000 suspected jihadist fighters in overcrowded jails.

Syria's war has spiralled into a complex conflict involving word powers since it started in 2011 with the brutal repression of anti-government protests.