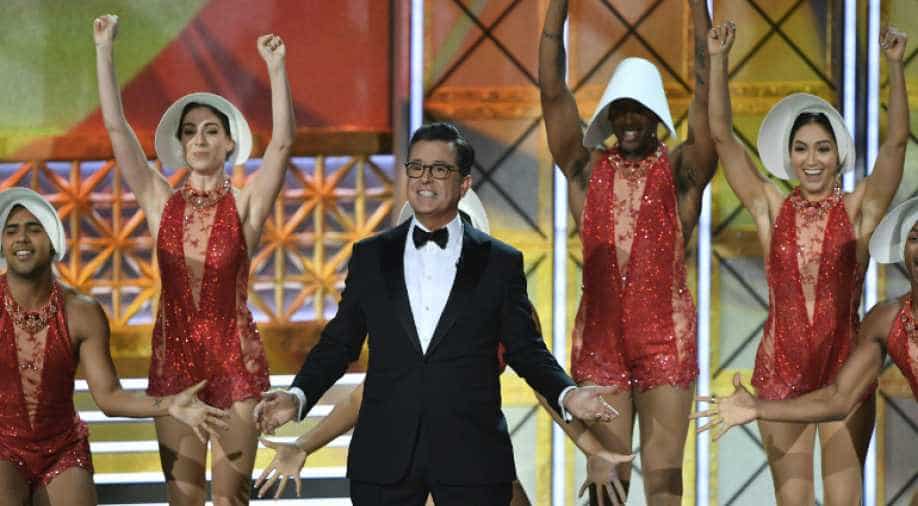 Hollywood's elite gathered Sunday as television's glittering Emmys placed politics front and center, in a race seen by critics as the most suspenseful in a decade.

The glitzy ceremony in downtown Los Angeles -- the first under the administration of President Donald Trump -- was widely expected to have a strongly political flavor, and host Stephen Colbert set the tone in his opening monologue.

"All the late night shows, obviously, 'House of Cards,' the new season of 'American Horror Story.'"

You can't deny that every show was influenced by Donald Trump in some way,' Colbert said. 'All the late night shows, obviously, 'House of Cards,' the new season of 'American Horror Story''

Politics was also in the air as John Lithgow picked up the first award of the night: best supporting actor in a drama for his acclaimed turn as Winston Churchill in Netflix's British royal drama "The Crown."

"In these crazy times his life even as an old man reminds us what leadership and courage in government really looks like," the US actor said.

Its haul of five Creative Arts statuettes included outstanding guest actress in a comedy series for Melissa McCarthy, whose "Unhinged Spicey" take on Sean Spicer came to embody early criticism of the administration.

The former White House press secretary, whose full-throated defense of Trump earned him derision on television, delighted his former tormentors in a surprise appearance at the opening of the show.

SNL was leading with four statuettes as the ceremony reached the final stages, with Kate McKinnon tearfully accepting the award for best supporting actress in a comedy series for her portrayal of Hillary Clinton.

She told reporters backstage that the role had been "the greatest honor of my life" and talked of the "special kind of electricity" on set every week.

Alec Baldwin was tapped as best supporting actor in a comedy for his Trump impersonation.

"I suppose I should say at long last, Mr President, here is your Emmy," he joked, in a dig at Trump's oft-stated annoyance at never having won a statuette for NBC reality show "The Apprentice" or its celebrity spin-off.

The show also picked up the award for best variety sketch show and outstanding directing.

Elsewhere in the comedy stakes, Donald Glover was a big winner, taking home a brace of statuettes for directing and starring in the FX comedy series "Atlanta."

The award caps a huge year for Glover, 33, who already has two Golden Globes for the show, which focuses on the Georgia capital's rap scene.

Glover got a loud cheer when he took to the stage and thanked Trump for "making black people number one on the most oppressed list."

Julia Louis-Dreyfus, in one of the least surprising announcements of the night, won her sixth consecutive Emmy for playing hapless ex-president Selena Meyer in HBO's "Veep," which also won best comedy series.

Wide open field
HBO's fantasy epic "Game of Thrones" has a record 38 awards, but is ineligible for the 69th Primetime Emmys, having started its seventh season too late.

The three series already have a huge 13 statuettes between them from last weekend's Creative Arts Emmys, which recognize behind-the-scenes talent as well as guest acting appearances.

"Not since 'Mad Men' began its... winning streak in 2008 has there been such a wide open field for the night's most prestigious trophy: best drama series," said weekly trade paper Variety.

That category -- to be announced at the end of the night -- includes five debutants, "Westworld," "The Handmaid's Tale," NBC's family drama "This Is Us," and two Netflix shows, "Stranger Things" and British royal drama "The Crown."

"The Handmaid's Tale," based on the 1985 novel by Canadian author Margaret Atwood, had three statuettes going into the halfway point.

Its writer Bruce Miller was first on stage, followed by Ann Dowd, picking up her first Emmy at age 61 for her portrayal of brutal instructor Aunt Lydia.

"Well, I think this is a dream, you know. I know it's an actor's dream and I'm deeply grateful to you," she said.

"I have been acting for a long time and that this should happen now, I don't have the words."

The show's Reed Morano also picked up a statuette for directing.