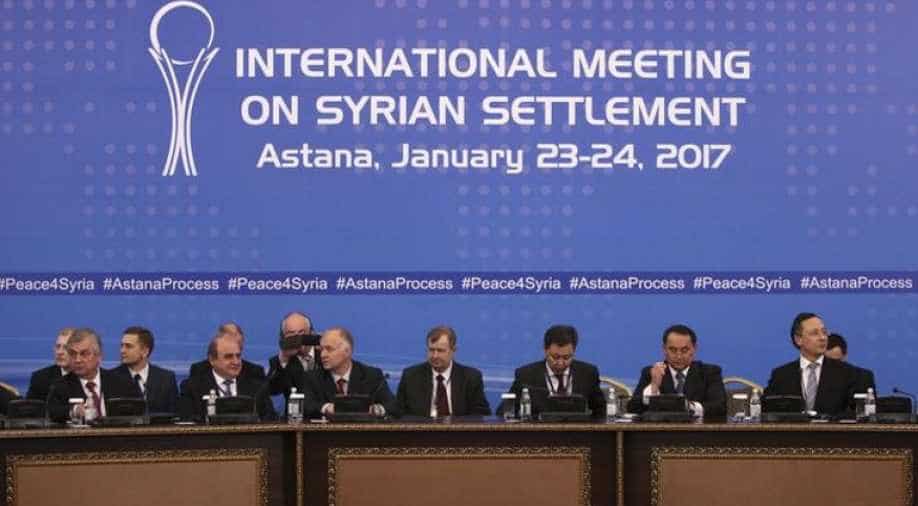 The Astana peace talks ended on Tuesday. All parties went back to their trenches with very little to be happy about. In a final joint statement, Russia, Iran and Turkey agreed to join their efforts in implementing a ceasefire. It is not clear how they intend to do it.

Neither the Syrian delegation nor the rebel spokespersons clearly stated if they will abide by the truce. Considering that the talks were meant to stop them fighting each other, this is a problem and a failure.

On the contrary, the two belligerents have been very clear about the heavy fighting going on in Wadi Barada, west to Damascus. Syrian envoy Bashar Ja'afari said that the area provides most of the water to Syria's capital city and their offensive to free it from rebel presence will not stop.

"As long as 7 million people in Damascus remain deprived of water, it (the offensive) will continue," he said.

Rebel groups consider this action a violation of any possible ceasefire, and it is very unlikely that they will be the first to lay down arms. This is another problem and another failure.

It was clear from the very beginning of the Astana talks that one should have set expectations very low.

The very nature of the Syrian civil war makes things very difficult. It has been, and it still is, a "bloody" war made of proxy armies, hegemony struggles, war crimes and relentless attacks against civilians. All parties fighting on the ground are extremely suspicious of each other.

The Syrian government representative and the rebels did not meet face-to-face; another failure.

The Rebels' delegation said it was not possible for them to sit with the ones they consider responsible for Syria's bloodshed.

These premises made it difficult to build an atmosphere of trust, especially given the fact that even the apparent guarantors -- Russia, Turkey and Iran -- have often diverging interests in the conflict.

Russia extensively bombed eastern Aleppo and is President Bashar Al-Assad's main ally. Iran is funding thousands of Shia militias both to support Assad to expand its influence in West Asia.

Turkey is sponsoring many of the rebel groups who were in Astana and sit neither on Assad's nor on Iran's side. Rebel groups have also many concerns about the thousands of Iran-funded Shia militiamen on Syrian soil. They accuse Tehran of systematically working to modify Syria's demographic pattern in favour of Shiite believers, currently a minority in the country.

On top of this, rebel groups consider President Assad's resignation a mandatory clause for any peace talks.

How each country will enforce the truce on its proxy army, it is really difficult to foresee. Russia, Iran and Turkey have announced they will meet soon again to define the strategy.

Participant's expectations were also very different. The Syrian envoy was expecting the rebels to surrender before any talk could begin. The request was firmly refused and rebel groups said they went to Astana only to discuss the implementation of a possible temporary ceasefire.

Rebels are not compact groups, there are different factions and not always coordinated. Major groups like Jabhat Fateh al-Sham, formerly al-Nusra Front, do not recognise Astana talks as valid and will not respect any agreement. In fact, during the talks, the group launched an attack in north-west Syria against the Free Syrian Army, one of the groups sitting in Astana.

Who was sitting at the talks mattered as much as who was not. The US were invited as a mere observer, even if they play a role in covering the advance of the Kurd/Arab Syrian Democratic Forces (SDF) in northern Syria. The SDF, who was not invited, is directly fighting boots-on-ground to clear the many villages from Islamic State presence in preparation for an eventual attack on the city of Raqqa, the IS capital city.

A serious round of talks must also include Saudi Arabia and Qatar, two countries which have often been pointed out as funders of Sunni insurgents in Syria, not least Jabhat Fateh al-Sham. The implementation of a ceasefire must also run through them to be more solid.

After six years of war, hundreds of thousands of deaths and millions of refugees and displaced civilians reaching a peace agreement in Syria is truly the need of the hour. This cannot happen without all parties involved sitting at a table and possibly in a truly international frame. And, unless all participants renounce to a part of their claims -- the Syrian government included -- it will be impossible to build a long lasting peace.