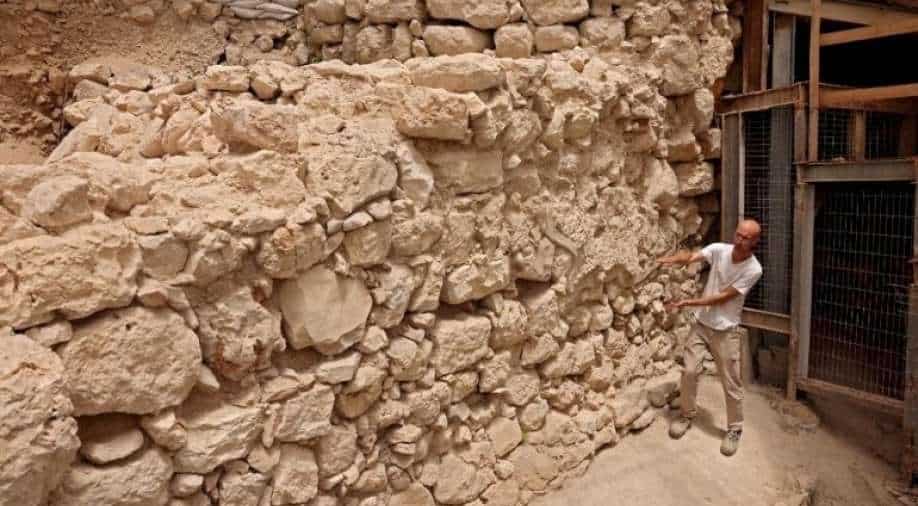 Israeli researcher Filip Vukosavovic displays a missing section of the city wall of Jerusalem that the Babylonians encountered on the eve of its destruction in 586 BC, after it was excavated by the Israel Antiquities Authority at the City of David national park, in Jerusalem Photograph:( AFP )

Archaeologists have found what they believe is a section of Jerusalem’s outer city wall, built in the 8th century BC.

The Israel Antiquities Authority announced Wednesday that the recent discovery of two stretches of stone bulwark from the Iron Age "unequivocally" prove a huge wall once protected the entire eastern flank of ancient Jerusalem.

Previous finds over the decades had uncovered two sections, one stretching for 90 metres and the other 30 metres, but a 70-metre gap between those two segments left doubts as to whether the ancient city of Jerusalem, with its First Temple, was shielded by an uninterrupted eastern wall.

The newly discovered segments consist of 14 metres and three metres.

The new find puts to rest an ongoing debate among archaeologists over whether the previously known wall sections were indeed used for fortification or instead as support walls for construction on the steep 30-degree slope on the eastern side of the city.

"Now that we found another two sections... we can conclusively say that the City of David in Jerusalem, the eastern slope, was surrounded by a massive wall," said archaeologist Filip Vukosavovic, who led the excavation for the Ancient Jerusalem Research Centre.

The archaeological site lies in Silwan, a Palestinian neighbourhood in east Jerusalem just south of the Old City. East Jerusalem was occupied  by Israel in the 1967 Six-Day war and was later annexed by the Jewish state.

"The two segments that we found are actually the missing link between the previous two sections found in the City of David, and for years we've been trying to find it," Vukosavovic said.

The City of David, as the biblical patriarch called ancient Jerusalem after conquering it in the 10th century BC, was capital of the Judean Kingdom, which lasted until 586 BC, when it was overrun by the Babylonian king Nebuchadnezzar II and then destroyed.

The Israel Antiquities Authority said Wednesday in a statement: "it seems that the debate has been settled, and that this was unequivocally the eastern wall of ancient Jerusalem."

A stone Babylonian stamp seal depicting gods and a clay stamp seal impression bearing the Judaean name Tsafan were found near one of the newly unearthed sections.

The entire wall, rising from the bedrock of the sloping hill, was likely built around the eighth century BC, and served "the main defensive line in case of attacks on Jerusalem," Vukosavovic said.

"I can tell you absolutely that when the Babylonians arrived, approximately a year and a half before they destroyed the city, it is this wall they see, stone for stone," he told journalists.

The newly found longer segment of the wall was within the "City of David National Park", run by hardline settler organisation Elad, which seeks to bolster the Jewish presence in east Jerusalem.