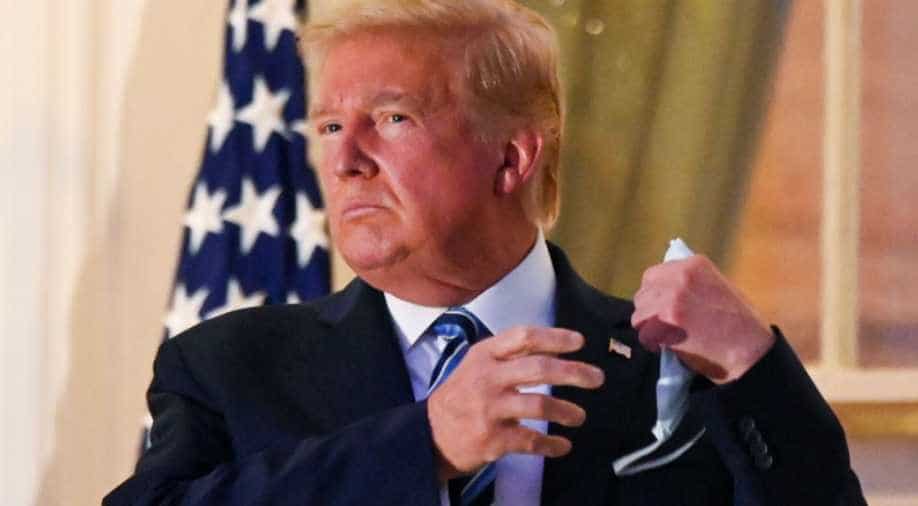 US President Donald Trump pulls off his face mask as he returns to the White House after being hospitalized at Walter Reed Medical Center for coronavirus disease (COVID-19), in Washington. Photograph:( Reuters )

The US President Donald Trump tested positive for the novel coronavirus few days ago and was taken to the Water Reed hospital for treatment.

A new poll conducted by Axios-Ipsos revealed that nearly 21 per cent respondents have now started wearing face masks and maintaining social distance since the president was seen struggling for breath on the White House balcony.

The poll was conducted with 405 Americans between Friday and Monday, and while 21 per cent participants agreed to changing their behaviour, rest still believe in trump's policy of wearing a mask "only when necessary".

Only 12 per cent participants said they would be willing to wear gloves to avoid contracting the virus by touching surfaces in public spaces. However, 85 per cent decided to avoid gloves, and 3 per cent said they are less likely to change their gloves-wearing habits.

In another survey conducted by CNN International media house, it was revealed that nearly 69 per cent Americans have lost trust in the information coming from the White House since the President tested positive, and 12 per cent they now don't "fully" trust the White House information.

Interestingly, 63 per cent people said they feel Trump's own infection with the virus is less likely to change the way he will be handling the pandemic, and 60 per cent said they disapprove with the whole narrative.

The polls have come out at a time when Trump is facing the wrath of experts and opponents for comparing the COVID-19 to a "flu" and asking people to not let it "dominate" their lives. "Flu season is coming up! Many people every year, sometimes over 100,000, and despite the Vaccine, die from the Flu. Are we going to close down our Country? No, we have learned to live with it, just like we are learning to live with Covid, in most populations far less lethal!!!," Trump tweeted.