Amazon fires is a red alert, world needs to put in efforts to preserve forests: Brazilian ecologist to WION 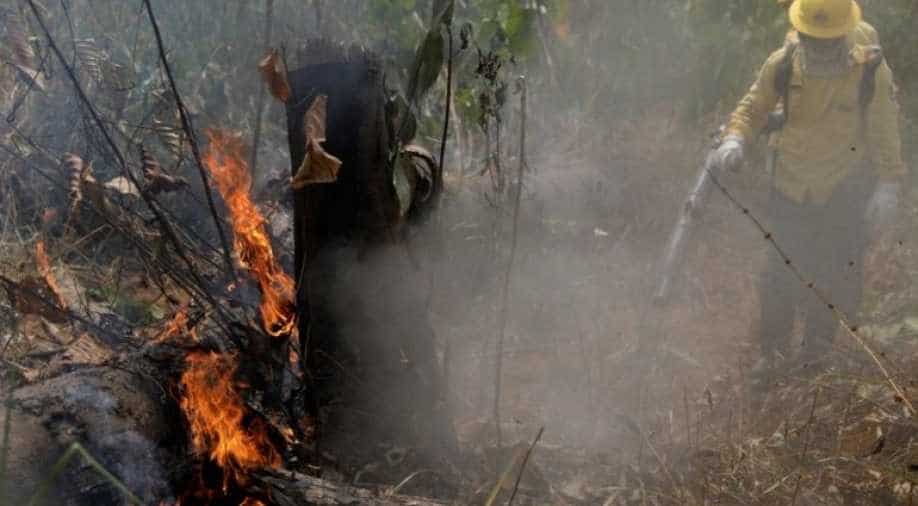 WION spoke to experts on Amazon wildfires. Here is an excerpt from the exclusive interview

The Amazon rainforest, which produces about 20 per cent of the Earth's atmosphere's oxygen, is burning from wildfires at a record rate and has drawn international attention. Environmental activists have been staging protests at Brazilian embassies worldwide and accusing Brazilian President Jair Bolsonaro of supporting farmers who are burning the rainforest to expand farming land.

WION spoke to experts on Amazon wildfires. Here is an excerpt from the exclusive interview.

Speaking to WION, Adriane Esquivel Muelbert, Research fellow at the University of Birmingham studying impacts of climate change on forests / Brazilian ecologist called for the entire global community to come forward and help in preserving the forest.

Calling the ongoing burning of Amazon fires as a red alert, the Brazilian ecologist said the whole world was dealing with a global issue and added that everyone needs to put in some efforts to preserve the forests.

She said no kind of intervention could be done, however, added that putting pressure on Brazil and other countries was required to better regulate environmental loss.

She also added, "Brazil has been doing very well for the past few years, and added that it would be amazing if the country continues with the policy that was done before.

She also called the whole world has to make a big effort to keep a check on CO2 in the atmosphere.

Answering a question on Bolsonaro's political posturing, she said, " the world had no time to waste as we were dealing with a an emergency situation.

She said, "This is no time for political gains...this is time for taking action and solving this problem. Everday the forest is burning, we are losing our chances to fight climate change more and more. The more we take time to take action, the more..the biggest of problems become more."

Carlos Nobre, University of Sao Paulo climate scientist said the immediate effect of the forest fire will be in South America. He said the Organic material which is burning will eventually end up in smoke and travel upto 3000 kms in the south creating polluted atmosphere for several months.

He added that the forest fire will attack the health of over 20 million people.

Nobre highlighted on the long term impact of the forest fire when a tipping point will be exceeded and 50-60 per cent of the Amazon will become a degraded dry Savanna.

Answering about Bolsonaro's political posturing he said, "Its a waste of time and diplomacy. This has become a personal issue."

He said, "The last statement by Brazil government officials is that they will overcome this personal war and they will accept international aids from G7 and also coming from anywhere is a good move."

He encouraged the acceptance of any aid coming to get rid of the fire.

He also emphasised on the need for law enforcement to prevent illegal activities claiming that most of those fires come from chopped down trees and not from standing trees. He said, "Trees were chopped down two three months ago, they were left drying out. Now people are setting fire on them."