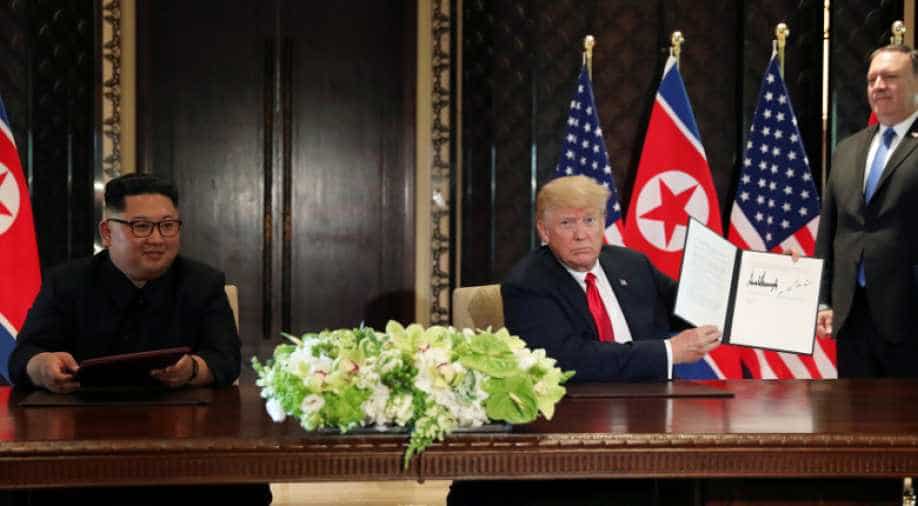 the US state department said it was in touch with the North Koreans on the issue of denuclearisation.

Just hours after North Korea reportedly tested a new "high-tech" weapon, the US said it was confident Kim Jong-un would fulfil his promise of de denuclearising the Korean Peninsula.

"At the Singapore Summit, President Trump and chairman Kim made a number of commitments regarding final, fully verified denuclearization and creating a brighter future for North Korea," the US state department spokesman said.

Despite the talks, military manoeuvres have been taking place by both sides. US aircraft carriers USS Ronald Reagan and the USS John C Stennis conducted war drills in the  Philippine Sea close to North Korean waters even as a US think tank declared recently that North Korea was still maintaining ballistic nuclear sites despite promises to denuclearise.

However, the US state department said it was in touch with the North Koreans on the issue of denuclearisation.

"The President has made clear that if Kim Jong Un denuclearizes, there is a bright future for North Korea," the State Department said, adding,"we remain confident that the promises made by President Trump and chairman Kim will be fulfilled."

President Trump and Kim had met in Singapore in June with the North Korean leader pledging to completely do away with nuclear missiles and establish official contact with its neighbour in the south.

North Korea's latest missile test was the first since the country tested a succession of missiles last year and early this year. Despite this, US and North Korean officials have continued to their back-channel talks.

US Secretary of State Mike Pompeo was due to meet North Korea's Kim Yong Chol, a senior aide to Kim Jong Un, in New York earlier this month, but it was postponed to a later date.