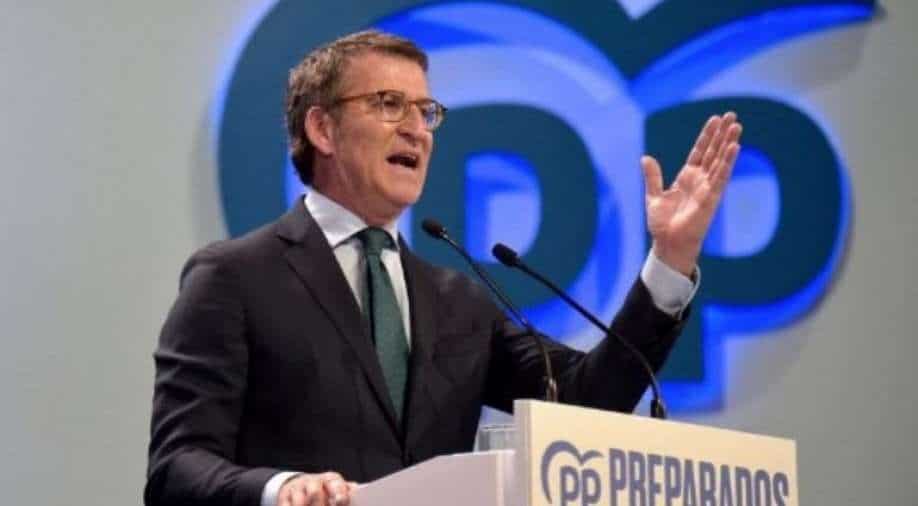 In a vote on Saturday morning, he was elected with 98.3 percent of the ballots at a two-day party conference in the southern city of Seville

Spain's opposition Popular Party (PP) on Saturday overwhelmingly voted for Alberto Nunez Feijoo as leader in the hope the calm, experienced moderate with a pragmatic outlook will return the right-wing faction to power.

After 13 years governing Galicia in northwestern Spain with an impressive track record of four absolute majorities, the party is hoping the 60-year-old will be able to translate his regional success to a national level.

In a vote on Saturday morning, he was elected with 98.3 percent of the ballots at a two-day party conference in the southern city of Seville.

"I have come here to win and to rule," he told delegates on Friday at a two-day party conference in the southern city of Seville.

"I am not running just to lead a party, but to serve Spain... Because Spain needs us more than ever. I will work tirelessly to pave a path that most Spaniards can walk along," he later tweeted.

The Galician leader was the only candidate running to take over from Pablo Casado, who was edged out following a bitter internal dispute with one of the party's rising stars.

When Casado took over as PP chief in July 2018, he was a young hardliner who promised to breathe new life into a party snarled in corruption and bleeding votes.

But barely four years later, he was left fighting for his political life after a very public confrontation with Isabel Diaz Ayuso, whose success as Madrid regional leader threw his own lacklustre leadership into sharp relief.

In a parting address on Friday, Casado told delegates he was also giving up his seat in parliament and all "positions of responsibility" in the PP, with party barons thanking him for his time as leader.

"We must be totally committed to his success, because it will mean success for all of us and for Spain," said Aznar, speaking by video link because he has Covid-19.

Feijoo v. Vox and the Socialists

Feijoo is the only one of Spain's regional leaders to govern with an absolute majority in a region where the Socialists pose no threat and the far-right Vox has made no headway despite growing popularity across Spain.

But at a national level, the situation is the opposite, and Feijoo will have to contend with a Socialist-led government, its hard-left partner Podemos and Vox in the ascendency.

During his long political career, Feijoo has steered clear of scandal, despite the emergence of photos from the mid-90s showing his friendship with a cigarette smuggler later jailed for drug trafficking.

While admitting they were friends at the time, Feijoo said he had no idea about the illegal activities.

During a national tour to present his candidacy, Feijoo made a few slips, including a reference to the government as "autistic" for which he later apologised to those with the condition.

General elections are due by the end of 2023 but Pedro Sanchez's left-wing coalition is already worn out by the pandemic, soaring inflation and social unrest over spiralling prices as well as the global uncertainty caused by the war in Ukraine.

The far-right has also been a headache for the PP, which has watched how Vox has, within eight years, managed to obtain 52 of the 350 seats in Spain's parliament as its own showing has fallen from 186 to 88.

Feijoo's job is now "to attract the centrist voters" that brought the PP's Aznar and Rajoy to power, said Ernesto Pascual, a political scientist at Barcelona's Autonomous University.

Even if the PP does succeed in next year's election, recent polls suggest it could need the support of Vox to govern.

Alarm bells sounded last month when the PP made a coalition deal with Vox, letting the far-right faction into a regional government for the first time, raising fears it could be a blueprint for future power-sharing, both regionally and nationally.