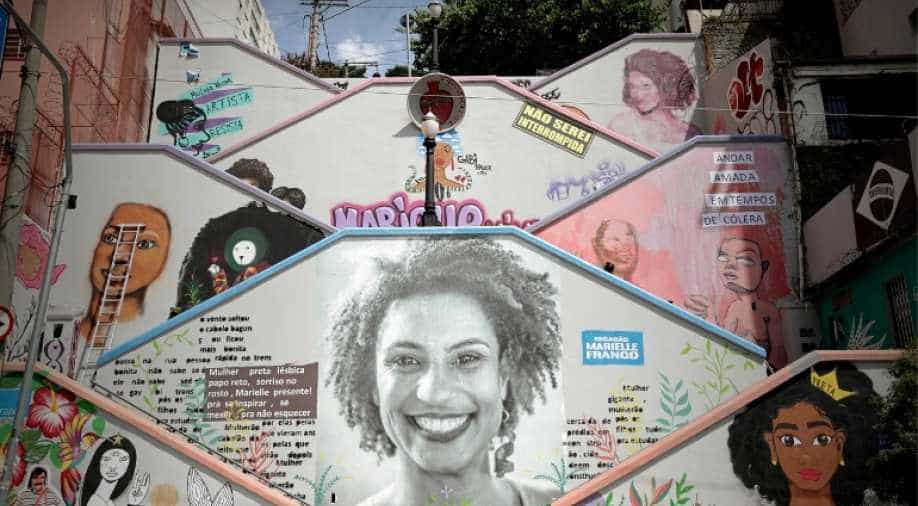 A general view of a mural at a staircase in Sao Paulo that serves as a memorial to slain Rio de Janeiro city counsellor and human rights activist Marielle Franco. Photograph:( Agencia EFE )

The staircase features a large photograph of Marielle Franco, an Afro-Brazilian lesbian and charismatic champion of the rights of black women, the LGBTI community and other marginalized people in Rio.

A cement staircase in a trendy district of this Brazilian metropolis serves as a memorial to a slain Rio de Janeiro city councillor and rights activists and a vehicle for artists looking to carry on her struggle.

The staircase features a large photograph of Marielle Franco, an Afro-Brazilian lesbian and charismatic champion of the rights of black women, the LGBTI community and other marginalized people in Rio.

It also has served in recent days as a place for Afro-Brazilian and lesbian artists to display their own work after local authorities painted over an earlier mural there in honour of Franco, who was shot and killed along with her driver on March 14, 2018.

The murder of the 38-year-old Franco, an Afro-Brazilian lesbian who grew up in one of Rio's toughest neighbourhoods and was a vocal critic of killings by police and para-police death squads known as militias, remains unsolved nearly a year later.

But the militias, which usually include serving and former police officers, are suspected of having played a part in what rights organizations have called a targeted assassination.

The so-called "Escadão Marielle Franco" (Marielle Stairs) in the Pinheiros district dates to just six days after the activist's murder when the Casadalapa artists' collective placed a four-by-three meter photograph of Franco on the stairs and several graffiti artists began putting up their own designs around it.

But according to one of those artists, Patricia Bonane, local residents learned just a few months after the memorial was inaugurated that the city government was planning to carry out a reform of the staircase that included re-painting all of its walls.

The project also was to require the eviction of a married couple and a man who has been living under the stairs for eight years.

But "social pressure" succeeded in halting the eviction, according to Bonane, who said the activists had to take on the role of security guards to keep watch over those people's residences.

Despite that small victory, city authorities eventually covered the mural with grey paint at the end of last year; however, they left the photo of Marielle and some inscriptions around it due to pressure from local residents, Bonane said.

Asked by EFE about the decision to paint over the mural, the Sao Paulo city government replied that the action was a "structural reform" aimed at "improving pedestrians' safety."

With the staircase once again unadorned, the Casadelapa collective contacted a group of female graffiti artists to resume the artistic project, but the response was not what they had in mind.

"Most (of the women) were white and not marginalized," said one of the artists, Maria Luiza Meneses, who stressed the need to "subvert the established order" and provide space for those who normally do not have a voice: "black or indigenous women, the marginalized population and lesbians."

Graffiti art also is "a hierarchical world" in the sense that "only those with the money to buy material can paint," the art history student said, adding that "it's black women who still have the worst jobs."

And even when a new list of artists was created, black women had the most difficulty participating because "they worked on Saturdays, lived further away or couldn't leave their children," Meneses said.

In the discussions surrounding the design of the mural, she said some of the white female artists complained that the new system was fraught with a "victim mentality" and "segregation."

This underscored the need for debate, according to Meneses.
"It's not easy to recognize that one has privileges" and that it's necessary to "review our behaviour."

The young artist commented while resting at the foot of her still-unfinished work, one of the different portraits of Franco that adorn the walls of the staircase and which are surrounded by floral motifs and colourful slogans and signs.

They include a well-known phrase uttered by Franco: "I will not be interrupted."