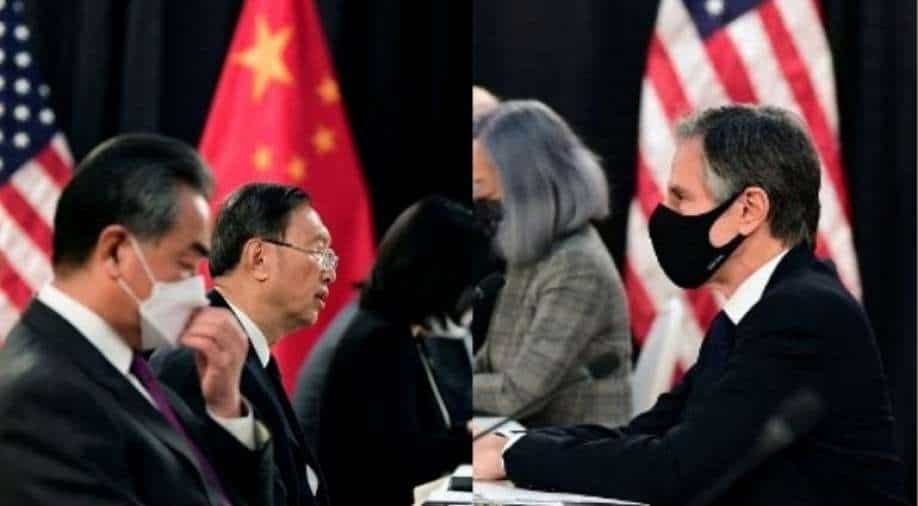 US and Chinese officials during talks in Alaska Photograph:( AFP )

Blinken said the US will discuss "deep concerns with actions by China, including Xinjiang", "genocide" against Uyghur Muslims including dialogue on "Hong Kong, Taiwan, cyberattacks on the United States, economic coercion toward our allies."

As US and Chinese officials began talks in Alaska for the first time under the Biden administration, China top diplomat Yang Jiechi threatened "firm actions" against "US interference".

"China is firmly opposed to US interference in China's internal affairs, we have expressed our staunch opposition to such interference and we will take firm actions in response," Jiechi who is the director of the Chinese Communist Party's central foreign affairs commission official said.

"What we need to do is to abandon the Cold War mentality, and the zero sum game approach" Jiechi added.

US Secretary of State Antony Blinken hit back saying China's actions "threaten the rules-based order that maintains global stability" during the meeting in Anchorage.

Blinken said the US will discuss "deep concerns with actions by China, including Xinjiang", "genocide" against Uyghur Muslims including dialogue on "Hong Kong, Taiwan, cyberattacks on the United States, economic coercion toward our allies."

Foreign Minister Wang Yi said, "This is not supposed to be the way one should welcome his guests" as the two sides clashed openly in face-to-face talks.

Yang lashed out at the US delegation, saying: "The United States uses its military force and financial hegemony to carry out long arm jurisdiction and suppress other countries, it abuses so-called notions of national security to obstruct normal trade exchanges, and incite some countries to attack China."

"Let me say here that in front of the Chinese side, the United States does not have the qualification to say that it wants to speak to China from a position of strength," Yang said, adding, "the US side was not even qualified to say such things, even 20 years or 30 years back, because this is not the way to deal with the Chinese people."

The United States accused the Chinese diplomatic leaders of "grandstanding" while focussing on "public theatrics and dramatics over substance".