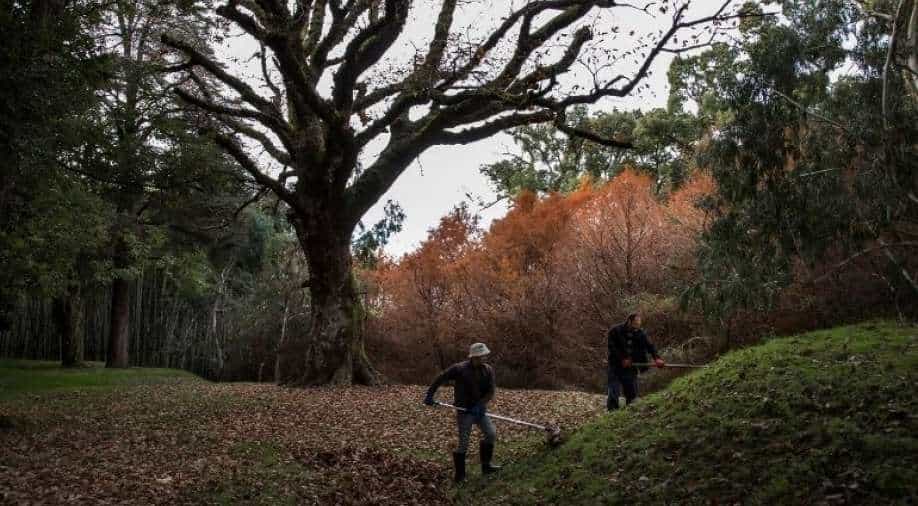 Over the past five years, people in Georgia witnessed a surreal spectacle: giant, even centuries-old trees floating upright on the Black Sea.

Imposing magnolias, tulip trees and other magnificent species glided by on the water’s surface, their mighty boughs spread wide in a procession that looked both poetic and delirious.

The trees, mounted on barges pushed along by tugboats, were on their way to replanting in a park being built by an eccentric billionaire and former prime minister, Bidzina Ivanishvili — a man many Georgians believe still wields substantial political power despite saying he retired to focus on philanthropy.

More than 200 trees arrived at the park in total, dug out of the soil in the impoverished villages and thick forests of Georgia, a small nation in the Caucasus. Ivanishvili personally vetted most of the choices.

About half were ferried to the park on the barges and another half transported by trucks. Riverbeds were widened, and trains had to stop to make way for them, which Georgians seized on as evidence of his continuing ability to move officials with the same impunity he does trees.

Opened to the public in the summer of 2020, Ivanishvili’s park is a rare public manifestation of his opaque but overwhelming presence in Georgia.

He has no official role in government, but his critics say Ivanishvili, 65, still has outsize sway behind the scenes.

“The power is concentrated in the hands of one man, and of course it is Bidzina,” said a former ally, Giorgi Gakharia, who resigned as prime minister in February, saying that the billionaire’s control had become too suffocating.

The Shekvetili Dendrological Park, on Georgia’s Black Sea coast, reflects Ivanishvili’s extravagant tastes, with its winding layout — centered around a pond filled with pink flamingoes, pelicans and other exotic birds — having been personally designed by him, according to Paata Sulaberidze, the project’s manager.

A chain-link fence separates the public park from Ivanishvili’s estate.

Entrance is free at the park, which cost him tens of millions of dollars to create, Ivanishvili said in a rare interview with a business magazine in Georgia.

But signs declaring this property private are everywhere. Closed-circuit TV cameras are installed throughout, and motion detectors stand in front of every tree. Look, but don’t dare touch. And that message goes for the lawn, too. Guards with loudspeakers are quick to scold the noncompliant.

Still, many visitors said they enjoy the park immensely.

“It might not be right, but if these trees feel good here, then why not?” said Nyusya Goman, 19, a manicurist. “Of course, he did it for himself first,” she said, referring to Ivanishvili. “People say that he comes in the mornings to get filled with energy emanated by the trees.”

Theories abound on why Ivanishvili is so infatuated with trees. Some Georgians ruminate that he is a druid who worships them.

Salomé Jashi, a Georgian film director, sees something beyond a love of nature in Ivanishvili’s obsession.

“For me, a floating tree was a symbol of power, of desire, of wanting something at any cost,” said Jashi, who made a documentary about the park project.

Many Georgians say they admired Ivanishvili for the free access to his park, which has received more than 1.5 million visitors so far, and for his philanthropic work, including paying stipends to Georgia’s artists and poets.

“People don’t realize that he has helped so many in Georgia,” said Rostom Bolkvadze, an entrepreneur from Batumi, the resort city nearby, who has visited the park.

Ivanishvili’s political opponents, however, compare him to a feudal lord, who sprays little driblets of wealth on people to buy their goodwill.

And they insist his retirement is a fiction. “He is nowhere to be seen, but the truth is that he is present everywhere,” said Armaz Akhvlediani, a member of Georgia’s Parliament.

Ivanishvili made his fortune in Russia, where he assembled a metals and banking empire during the chaotic post-Soviet transition. His wealth is currently estimated at $6 billion, a sum that exceeds Georgia’s state budget for 2021.

Many Georgians speculate that the Kremlin never would have allowed such wealth to leave the country unless it was confident the money would be used to buy influence in Georgia, a strategically important country that is struggling to preserve its independence against the great power ambitions of neighboring Turkey and Russia.

One of Ivanishvili’s fiercest critics is a former president of Georgia, Mikheil Saakashvili. After spending years abroad, Saakashvili made a dramatic and surprising return to the country in September and is currently being held on abuse of office and other charges that he denies.

Saakashvili, who tried to distance Georgia from its Soviet past during his presidency, calls himself “Putin’s prisoner” and claims Ivanishvili is the Kremlin’s lackey.

But Giorgi Khelashvili, a member of Parliament from the Georgian Dream party, founded by Ivanishvili, argued that the retirement was sincere.

“His idea was to leave the system, and he wanted to leave the government a system that would take care of it, and he would just step aside,” Khelashvili said.

If his role now is murky, Ivanishvili once played a very open and prominent part in Georgia’s emotionally fraught political scene, in which a candidate’s attitude toward Russia is scrutinized by voters.

As the leader of a coalition of political parties, he won the 2012 parliamentary elections and served as prime minister from October of 2012 through November of 2013, during which time he pursued Georgia’s NATO and European aspirations but also tried to be pragmatic with Moscow.

His coalition had campaigned in opposition to Saakashvili, then the president, whose party’s loss led him to step down and soon leave the country.

As seen this month in the deadly protests in Kazakhstan, the transfer of power in many of the former Soviet republics has often been chaotic and violent. Ivanishvili’s supporters point to his decision to voluntarily step down as prime minister after a year as evidence he is hardly power hungry.

For now, Ivanishvili appears most interested in his eccentric hobbies, which sometimes manifested themselves during his stint as prime minister.

Akhvlediani, the lawmaker, who in 2013 worked closely with Ivanishvili as the chairman of his political party but has since had a falling out, recalled how on an official foreign visit to Strasbourg, Ivanishvili was mostly interested in the city’s zoo, where he purchased stork eggs to bring home.

While a passion for trees may appear harmless, that’s not necessarily the case when a powerful billionaire is the one hooked.

When Toby Kiers, a professor of evolutionary biology at Vrije University in Amsterdam, learned about Ivanishvili’s undertaking to uproot ancient trees, she said she felt physical pain.

“For hundreds of years, these ancient trees have been cultivating their unique underground ecosystems, including vast fungal networks supporting the tree since it was a tiny sapling,” said Kiers, who has been researching how trees are connected. “When a tree is uprooted, that life support system gets ripped from the soil, leaving behind a barren wasteland.”

For Valentina Slobodenyuk, what was left behind was a view of the sea that had been blocked by the giant sequoia and ginkgo biloba that Ivanishvili took away for his park.

The trees had played a significant role in her life, she said, with the sequoia providing welcome shelter during thunderstorms. Slobodenyuk now visits the trees in their new home.

“I miss them very much,” she said.