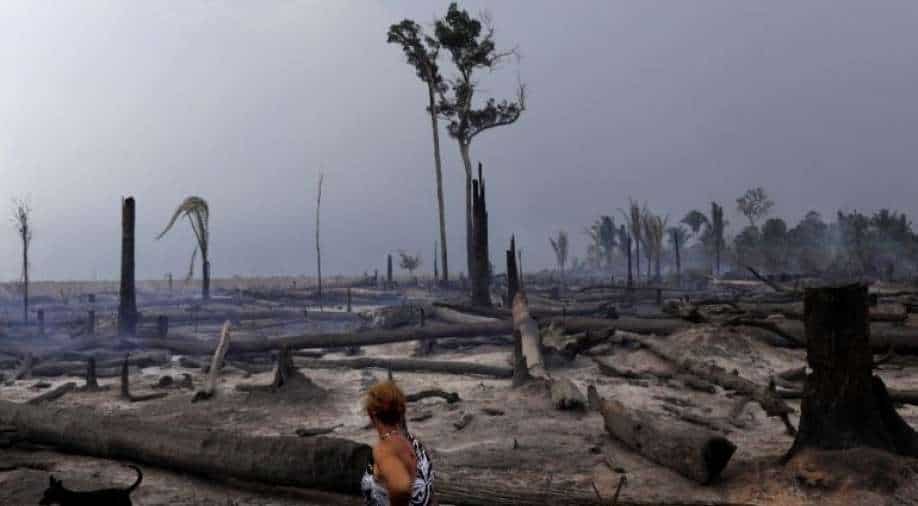 Eliane Muller, 40, walks next to a burnt tract of the Amazon forest as it is cleared by farmers, after the fire hit 2 acres from her cassava plantation in Rio Pardo, Rondonia State, Brazil, September 16, 2019 Photograph:( Reuters )

A new survey has revealed which country feels more concerned by climate change. Brazilians came at the helm of perceiving climate change as a “catastrophic risk”, when compared to people living in big economies, followed by India and South Africa

A new survey has revealed which country feels more concerned by climate change. Brazilians came at the helm of perceiving climate change as a “catastrophic risk”, when compared to people living in big economies, followed by India and South Africa.

Fires have continues to wreak havoc in Brazil’s Amazon Rainforest - referred to as the “Earth’s lungs”. Rampant illegal deforestation has also crippled the function of the forest.

About 93 per cent Brazilians who were surveyed claimed that climate change continues to be severe. They also acknowledged other factors like rising sea levels, melting glaciers.

The survey was undertaken by the Global Challenges Foundation, a non-profit organisation based in Sweden.

The survey also found that nine other countries - United States, United Kingdom, India, China, South Africa, Russia, Germany, Australia, and Sweden agreed on the severity of the climate crisis to a lesser extent.

Following Brazil were India and South Africa where 91 per cent respondents referred to the climate change crisis as severe. China followed with 89 per cent, Sweden with 88 per cent, while Australians appeared to be the least concerned with 70 per cent.

In the US, 73 per cent agreed that climate change is severe and requires immediate action.

"The main takeaway is that so many people … already today feel they are affected by climate change," Jens Orback, executive director of the Global Challenges Foundation told Reuters.

"There is a high amount of people asking international institutions to step up," he added.

According to the survey, which was conducted in June-July, climate change was among the top three risks faced by people in all countries.

It took into account the responses of 1,000 people per country. In India, Brazil, China, South Africa, and Russia, at least 50 per cent respondents claimed that they are already dealing with the direct products of climate change - high temperatures, fires, pollution, floods, etc.

People in Germany felt the least affected, with only 21 per cent saying so, followed by Australia at 35 per cent. Sweden, the US and the UK tied at 42 per cent.