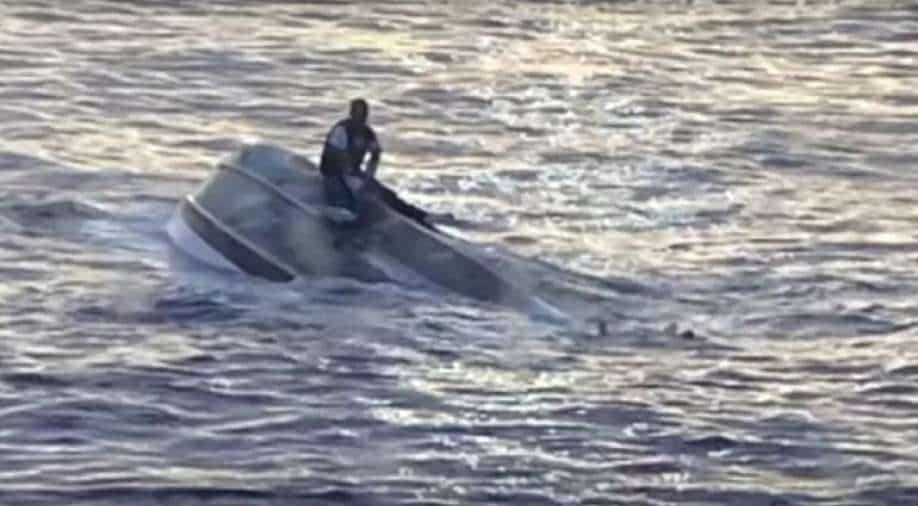 Human smugglers are known to use the Bahamas -- a group of islands near the Florida coast -- as a jumping-off point for transporting people, many from other Caribbean countries such as Haiti, to the United States

The US Coast Guard has launched a search for 39 people reported missing when a boat capsized off the coast of Florida in a "suspected human smuggling venture."

The Coast Guard in Miami said Tuesday it received a report "from a good Samaritan" who rescued a man "clinging to a capsized vessel approximately 45 miles east of Fort Pierce Inlet."

The survivor said the boat left Bimini in the Bahamas on Saturday night and had encountered rough weather before it capsized.

"According to the survivor, no one was wearing a life jacket," the statement said.

"Coast Guard air and surface asset crews are actively searching for people in the water. This is a suspected human smuggling venture," said the statement posted on Twitter.

It added later that air and surface crews would "continue to search throughout the night" for the missing people.

An image released by the Coast Guard showed the capsized vessel in the water with a man straddling the hull.

The survivor was taken to a hospital to be treated for dehydration and sun exposure, the Coast Guard said.

Human smugglers are known to use the Bahamas -- a group of islands near the Florida coast -- as a jumping-off point for transporting people, many from other Caribbean countries such as Haiti, to the United States.

According to the International Organization for Migration, around 5,000 Haitian migrants work legally in the Bahamas, but 20,000 to 50,000 of their compatriots are in the country illegally.

Bimini, the westernmost district of the Bahamas and its closest point to the mainland, is approximately 130 miles (217 kilometres) from Fort Pierce Inlet.

On Friday, 32 people were rescued after a boat capsized about five miles west of Bimini in another suspected human smuggling attempt, according to the US Coast Guard and the Royal Bahamas Defence Force.

The US Coast Guard tweeted that its vessels patrol the waters around Haiti, Puerto Rico and the Bahamas "to ensure the safety of life at sea."

"Navigating the seas in overloaded and less than seaworthy vessels is extremely dangerous and can result in loss of life," it warned.

Spikes in the number of people trying to reach the United States from the Caribbean have accompanied upheavals in the region.

US authorities noted an increase in migration from Cuba by the sea in recent months. In July, the country saw scores of demonstrations triggered by economic strife, medical and food shortages and anger at the government.