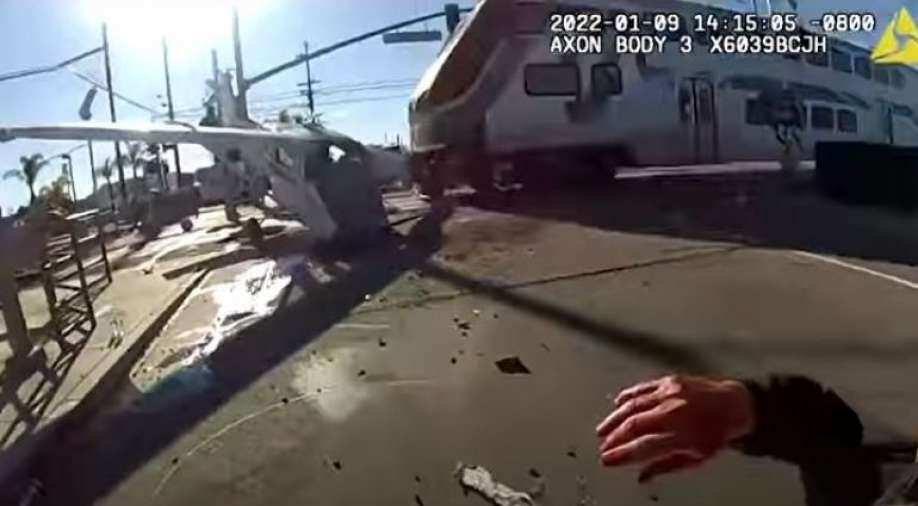 The pilot was rescued before the train hit the plane. Photograph:( Reuters )

Police in Los Angeles, California, pulled the pilot from a crash-landed Cessna seconds before the aircraft was hit by a train, sending debris flying in all directions.

The prompt response by US cops in Los Angeles, California has saved the life of a pilot in the Pacoima neighbourhood on Sunday.

The policemen extracted the pilot from a crash-landed Cessna aircraft seconds before the plane was slammed by a train, sending debris flying everywhere.

The plane crashed shortly after takeoff in the Pacoima district, according to local media, and a dramatic video shows many officers rescuing the man from the wreckage.

The police and pilot are only a few feet away from the tracks when a passing train crashes into the plane.

"The plane had a failed takeoff and landed on the train tracks at a popular intersection," said Luis Jimenez, the 21-year-old music composer who filmed the video.

"Just seconds before impact, police officers saved the pilot, and a piece of debris almost hit me."

The jet crashed mere blocks away from the LAPD's Foothill station on Osborne Street near the Whiteman Airport, according to LAPD officials.

The jet had lost power and crashed onto a residential area's train tracks.

The plane's mangled remnants remained on the railroad tracks near the Metrolink Antelope Valley station, and all train traffic in the vicinity was halted, according to LAPD officials.

According to local media, the pilot was treated for scratches and bruises and is in stable condition.

According to local media, no one was hurt on the train.

Bodycam footage of officers removing the bleeding pilot off the plane was uploaded on Twitter by the Los Angeles Police Department.

In a tweet, the department praised its officers, saying they "demonstrated gallantry and swift action by saving the life of a pilot who made an emergency landing on railroad tracks."