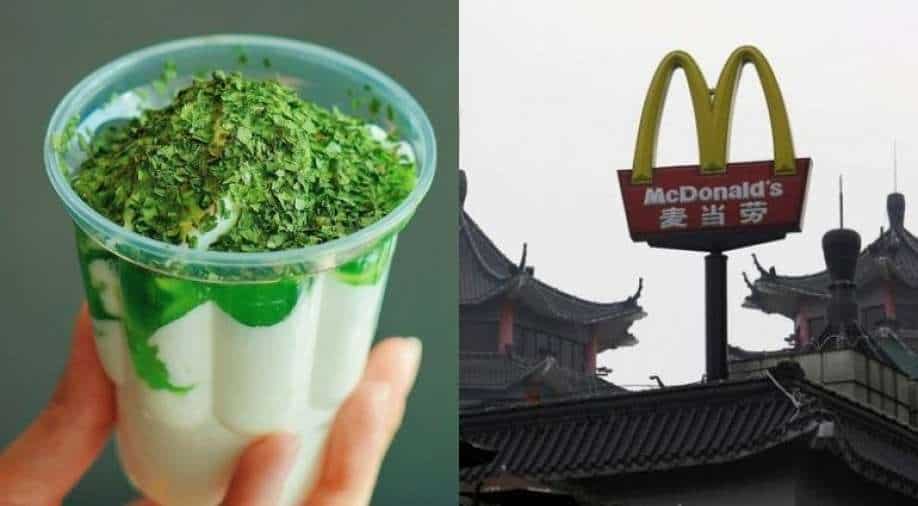 In this image, Cilantro Sundae (L) and McDonald's China logo (R) can be seen Photograph:( Twitter )

The sundae is available at the price of 6.6 Yuan in McDonald's stores in China as a series of “members only” promotions.

Global brands from restaurants to automakers sometimes roll out offbeat products to appeal to Chinese tastes in the populous and intensely competitive market.

“There is no need to release unnecessary products,” said a comment left on the company’s microblog account. It received more than 2,000 “likes.”

Hahahahaha it was a joke with U2 music, isn’t?

I am denouncing my heritage.

“When you hate someone but have to invite him to dinner, you can ask him to eat McDonald’s Cilantro Sundae,” said a separate comment on Sina Weibo.

McDonald's China had earlier made headlines for selling a sandwich made of Spam topped with crushed Oreo cookies Monday in China in an attention-grabbing move that has raised eyebrows.

It comes after the company's sales in China contracted after some cities banned dining in restaurants to control fresh pandemic outbreaks ahead of the February Winter Olympics.

McDonald’s in China and Hong Kong is 52 percent owned by CITIC, while Carlyle has a 28 percent stake. McDonald’s itself retains a 20 percent interest in the business. Menu innovation is a key focus for the partnership.

The structure is aimed at improving sales at existing stores and expanding outlets. The US fast food chain wants to to open more restaurants in lower-tier Chinese cities, boost delivery capacity and introduce a “digitalised and personalized” dining experience to more Chinese customers.

Fast-food firms including McDonald's and rival Yum China's KFC are bouncing back from a series of food-supply scandals in China that had dented performance.