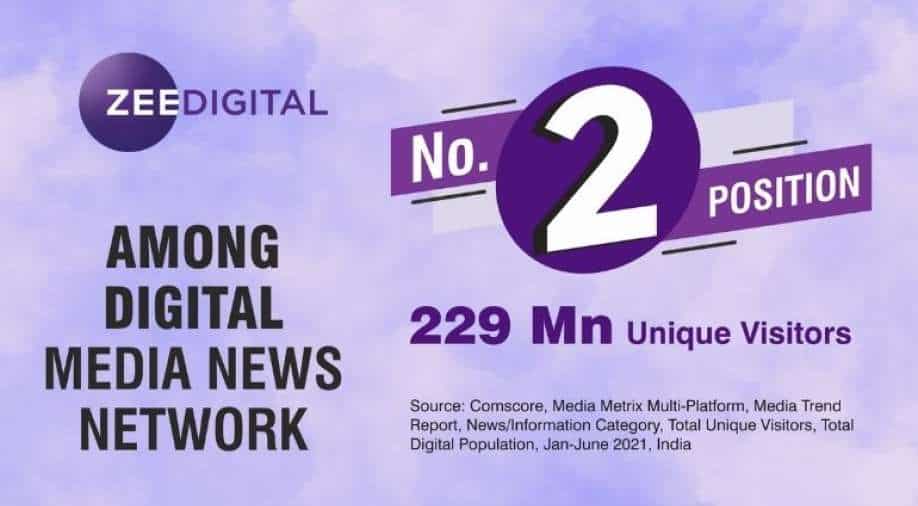 As per the latest figures, Zee Digital has reported a noteworthy 1.4 times growth from Jan’21 to June’21  by crossing 229 million unique visitors in June 2021.

Zee Digital continues to reach new landmarks and strengthen its presence in the digital world by ranking second in the News & Information category as per Comscore India Report for June 2021.

As per Comscore India Report, continuing with greater momentum and exhibiting excellence in the digital content space has led to such phenomenal growth for the second time in a row after the May 2021 ranking.

The company reported a noteworthy 1.4 times growth from Jan’21 to June’21 by crossing 229 million unique visitors in June 2021.

Witnessing a substantial leap, Zee Digital has witnessed the strongest growth among top media publishers in the country.

From the Jan’21 to June’21 period, Zee Digital achieved 1.4x growth, leaving behind its competitors.

Commenting on this victory for Zee Digital, Abhishek Nigam, COO– Digital of Zee Media Corporation Limited, said, "The team’s hard work and innovations in our assets have collectively helped Zee Digital become one of the most preferred destinations for content consumption in India and globally. With each new initiative, our endeavour has been to bring about a change that the users are willing to partake in. "

Zee Digital comprises of 31 websites, 20 brands across 12 languages, with viewers across digital replicas of Zee Media’s 14 linear news channels, along with websites such as WIONews.com, India.com, BGR.in, BollywoodLife.com, TheHealthsite.com, and CricketCountry.com.