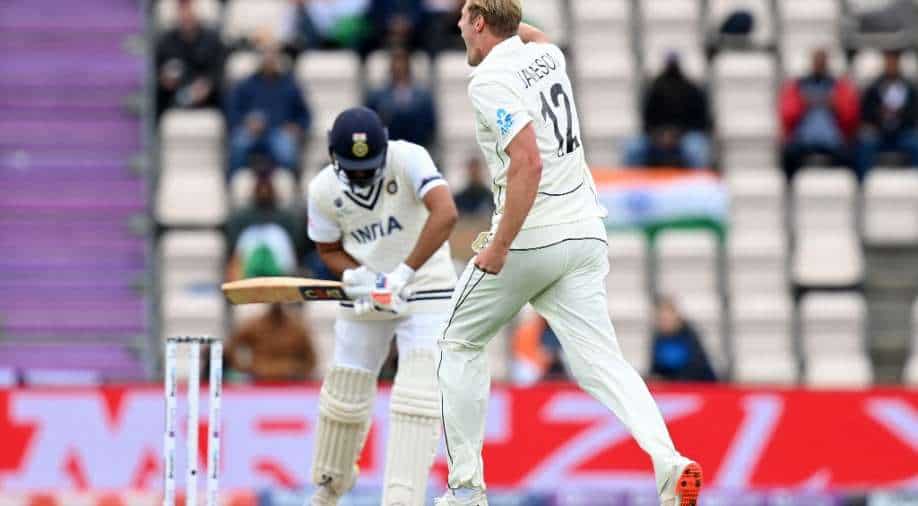 Kyle Jamieson said his team is satisfied to keep things yet to be determined after India came to 146 for three on day two of the World Test Championship final on Saturday.

Kyle Jamieson said his team is satisfied to keep things yet to be determined after India came to 146 for three on day two of the World Test Championship final on Saturday.

Notwithstanding, New Zealand had the option to take three wickets before terrible light carried an untimely finish to day two. The first day of the season was cleaned out.

During a post-match press conference after the end of day 2, Kyle Jamieson said: "It was a good day for Test cricket, the disruption probably didn't help the momentum that we had at that point of time. It was crucial to try to get balls in reasonable areas for long periods, how we did that throughout the day after they started off well was pretty pleasing, to keep things in the balance."

"There is a reason why they are one of the top teams in the world for a long period of time. For us, it was about putting the ball in the right areas and I think we were able to do that for the most part and take that confidence tomorrow" - he added.

Indian batting mentor Vikram Rathour said that a first innings score of 250 or more will place India in a battling position. After some information about his assessment, Kyle Jamieson said: "We certainly haven't spoken around a number, I think there is an opportunity to score runs as a batting unit and there is still some help with the ball moving around and seaming. The Indian batsmen have shown if you are patient, there are still runs to be had. So whether 250 is a good score, only time will tell."

Kyle Jamieson said his team was able to keep the ball in testing regions for an extensive stretch.

"You look at their lineup, you are expecting those guys to do well, they have good records and they have done special things around the world. They have put away slightly bad ball, they were able to score freely," he said.

"They certainly played well in first hours. We tried to wobble the ball a bit and keep guys engaged. It is part of our arsenal, there were no set plans how we want to operate after that first hour."

Kyle Jamieson was glad to see Shubman Gill not getting genuinely hurt by the bouncer bowled to him during the World Test Championship Final.

In the 17th over, Kyle Jamieson bowled a short delivery to Shubman Gill that smacked flush on the helmet. The physios and substitutes of the Indian cricket crew promptly raced to the middle to beware of Shubman Gill. Fortunately, the 21-year-old appeared all good, and he kept on batting in the middle.

"No, we didn't really talk about it too much. Obviously, I'm glad that he's okay and he continued on. It was not nice seeing someone get hurt and have the physios run on, so it was obviously good to see that he was okay and he was able to continue on."

With the New Zealand pacers' bowling pair, the Indian opening couple of Rohit Sharma and Shubman Gill attempted to descend the track at times.

"It was an interesting one, it is not something we probably expected a huge amount. My take was that, if they were walking then they were not comfortable where I was bowling in the crease, so I tried to take that as a positive. The more they felt that they had to move around to throw us off, we could just hang in there and it sort of can get dividends" - he concluded.