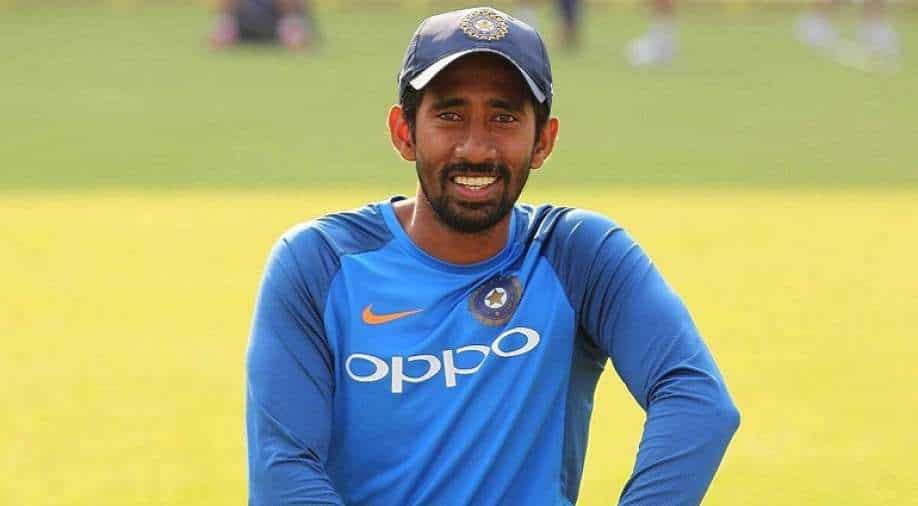 Wriddhiman Saha on Saturday said that he has shared all the necessary details on the whole matter with the administrators on allegedly receiving ‘threats’ from a journalist for not agreeing to give an interview.

After meeting the three-member committee formed by the BCCI to investigate the matter of Wriddhiman Saha allegedly receiving ‘threats’ from a journalist for not agreeing to give an interview, the wicket-keeper batter on Saturday said that he has shared all the necessary details on the whole matter with the administrators.

Saha, the 37-year-old centrally-contracted cricketer, had tweeted a screenshot of messages from a journalist last month, a little after he was excluded from India’s Test squad for the two-match Test series against Sri Lanka.

The issue escalated after former players like Ravi Shastri, Parthiv Patel, Harbhajan Singh, and Virender Sehwag, among others, joined in the criticism of the said journalist.

The Indian cricket board subsequently decided to get to the bottom of the issue and has constituted a three-member committee which comprises BCCI vice-president Rajiv Shukla, treasurer Arun Dhumal and apex council member Prabhtej Bhatia, to probe the matter.

“I have told the committee everything I know. All the details I have shared with them. I can’t tell you much right now. BCCI has asked me not to talk anything outside…about the meeting as they will answer all your queries,” Saha told reporters here.

It remains to be seen whether Saha has revealed the name of the journalist to the committee or not as the cricketer earlier had said that he wouldn’t reveal the name as it could harm the journalist’s career.

“I was hurt and offended. I thought not to tolerate such kind of behaviour and didn’t want anyone to go through this kind of bullying. I decided I will go out and expose the chat in the public eye, but not his/her name,” he had tweeted.

“My nature isn’t such that I will harm anyone to the extent of ending someone’s career. So on grounds of humanity looking at his/her family, I am not exposing the name for the time being. But if any such repetition happens, I will not hold back,” he added.

Saha, who has played 40 Tests, has already been told by Indian team management that it has decided to groom a younger wicket-keeper batter and for that reason, the veteran was overlooked for the Test squad against Sri Lanka.

KS Bharat was included in the Test squad as a backup for main-wicketkeeper Rishabh Pant for the Sri Lanka series.