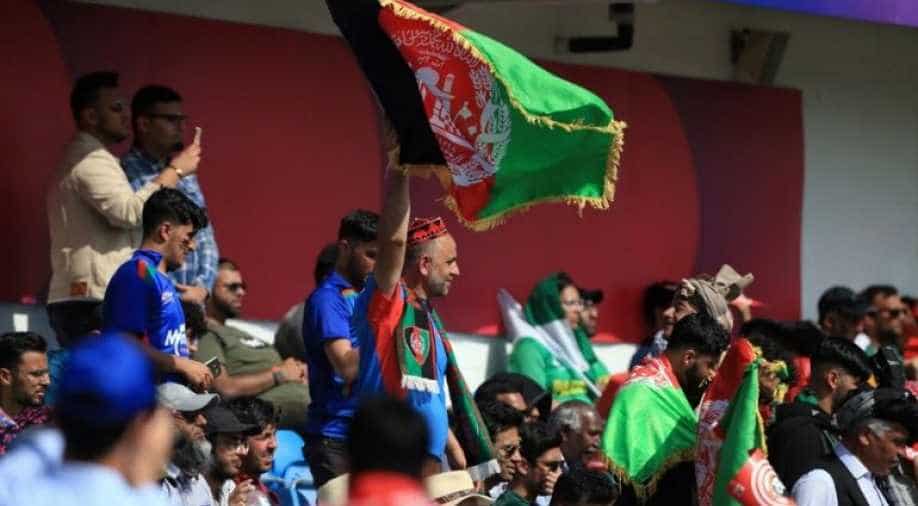 A spectator waves the Afghan national flag as he watches play during the 2019 Cricket World Cup group stage match between Pakistan and Afghanistan at Headingley in Leeds. Photograph:( AFP )

The International Cricket Council has said it will take action against any fans involved in "scuffles" before the Cricket World Cup match between Pakistan and Afghanistan at Headingley on Saturday.

Videos shared on social media showed supporters of both countries fighting outside the venue and security personnel being forced to intervene, while ESPNcricinfo reported that at least two fans had been evicted from the ground.

"We are aware of some scuffles among a minority of fans and are currently working with the venue security team and the local police force, West Yorkshire Police, to ensure there are no further incidents," an ICC spokesperson said.

"We do not condone this type of behaviour, and will take appropriate action against any anti-social behaviour that spoils the enjoyment for the majority of fans."

Local media reported that the trouble started when a plane towing the message 'Justice for Balochistan' flew over the venue. Balochistan is the largest province in Pakistan and borders Afghanistan to the north.

ICC Source: Fight broke out b/w Pak&Afghan fans in Leeds because a plane was flown which had Balochistan slogans. Apparently it was an unauthorised plane that flew over the stadium&political messages were visible. Leeds air traffic will investigate. (Pic courtesy: WorldBalochOrg) pic.twitter.com/cu0CyZ0w0U

"We work with local police forces around the country to prevent this type of incident occurring and were assured that given Headingley is under the flight path for the Leeds Bradford Airport it would not be an issue," the spokesperson added.

"We do not condone any sort of political messages at the ICC Men's Cricket World Cup and will work with West Yorkshire police to deal with and understand why this has happened and to ensure it does not happen again."

#WATCH: A scuffle breaks out between Pakistan and Afghanistan fans outside Headingley Cricket Ground in Leeds after an aircraft was flown in the area which had 'Justice for Balochistan' slogan. Leeds air traffic will investigate the matter. pic.twitter.com/mN8yymQOP5

West Yorkshire Police said they had been called in after "reports of some trouble outside the ground linked to people trying to get in".

"Officers attended to disperse the group without any issues and remained on patrol in the area," the police said in a statement.