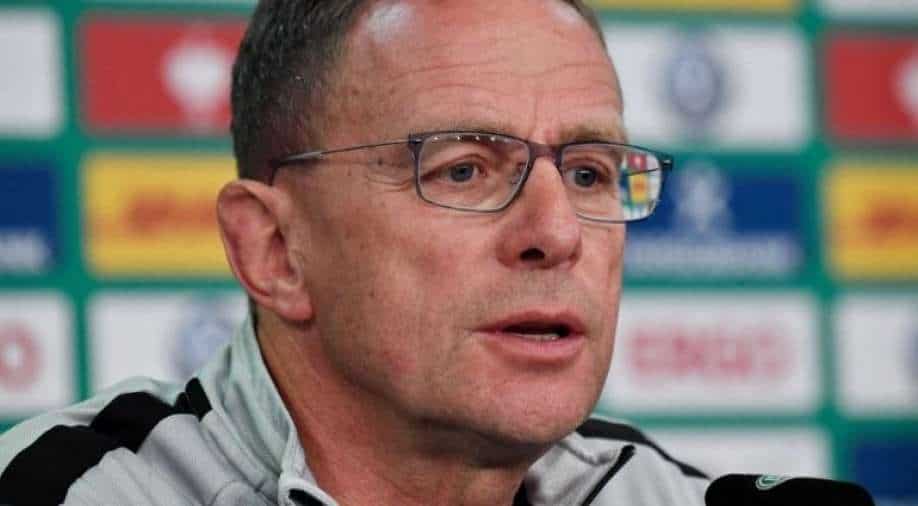 Rangnick also said that he rejected a four-month offer from Chelsea last season, and he had not discussed potential recruits during the January transfer window.

Manchester United's new interim manager Ralf Rangnick said the team's progress during his six-month tenure could determine whether he recommends himself to the Premier League club's board to continue as their permanent manager.

The 63-year-old German was appointed on Monday on a contract until the end of the season after the sacking of Ole Gunnar Solskjaer and will work in a consultancy role for a further two years.

The former RB Leipzig boss takes charge of seventh-placed United for the first time at Friday's training session having been granted a work visa this week ahead of Crystal Palace's league visit to Old Trafford on Sunday.

"The people with whom I've spoken with, they've been very clear that it's a six-month role," Rangnick told reporters in his first news conference at the club.

"We've never spoken about what will happen in the summer. Right now, I'm fully aware they might be looking for a new manager. If they then speak with me about that, we'll see.

"If they ask me for my opinion, and... everything goes well, we develop the team, I might even make the same recommendation to the board I made at Leipzig twice, when I recommended to them it might be a good idea to keep working with me for one year."

Rangnick, who was in the stands when caretaker manager Michael Carrick guided United to a 3-2 win over Arsenal in his final game on Thursday, said he was confident he could get the squad firing on all cylinders again.

"It's about winning games and, in the end, I'm ambitious. We want to make the most successful season that is possible. Right now, we have to be realistic," Rangnick said. "The difference between us and the top three is big. But let's see.

"The major target for me is to bring more balance to the team. We conceded two goals yesterday and if you look at the total number of goals conceded, it's on average two a game.

"That's too much. Those are not the kind of games you need every day. In football to me, it's to minimise the coincidence factor."

Rangnick, who also said he rejected a four-month offer from Chelsea last season, added he had not discussed potential recruits during the January transfer window.

"Now is the time to get to know the current squad in detail, the squad is definitely not too small," he said.

"There are enough players. Maybe after Christmas, there will be a time to talk about possible transfers. In my experience, winter is not the time for sustainable transfers."