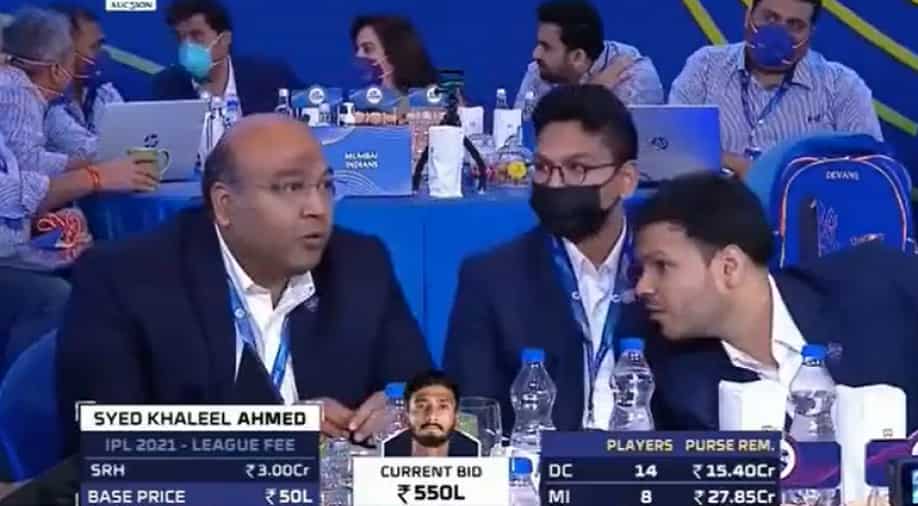 Auctioneer Charu Sharma made a goof up at the IPL 2022 mega auction. Photograph:( Twitter )

Auctioneer Charu Sharma made a huge mistake at the IPL 2022 mega auction as he ended up selling Indian pacer Khaleel Ahmed to Delhi Capitals despite Mumbai Indians having made the bid of the same amount before them.

The recently-concluded Indian Premier League (IPL) 2022 mega auction saw the ten teams build their squads almost from scratch and rope in some quality cricketers from around the globe in their respective sides. While Indian fast bowlers went for big money, some overseas stars also turned out to be costly picks at the mega auction.

Indian wicket-keeper batter Ishan Kishan was the most expensive buy at the IPL 2022 mega auction after going to his former side Mumbai Indians for a whopping Rs 15.25 crore (INR 152.5 million), making him the second-most expensive player in the history of IPL auctions.

The auction kept cricket fans across the globe hooked to their television screens as it produced some thrilling bidding wars between the ten teams. Noted presenter and broadcaster Charu Sharma won the hearts of many with his amazing work as an auctioneer after he had to replace Hugh Edmeades, who had an abrupt fall on day 1 and had to be provided immediate medical attention.

While Sharma went about his business with poise and confidence, he ended up making a big goof-up on day 2 of the IPL 2022 mega auction. The mistake took place when Delhi Capitals (DC) and Mumbai Indians (MI) were locked in a bidding war for Indian pacer Khaleel Ahmed.

As the bidding crossed the Rs 5 crore (INR 50 million) mark, Mumbai Indians were the first to raise the bid to Rs 5.25 crore (INR 52.5 million). Sharma then asked Delhi Capitals if they were willing to up their bid to Rs 5.50 crore (INR 55 million). DC co-owner Kiran Kumar Grandhi were seen hesitatingly raising the paddle to up the bid while also having a discussion with the other members in the DC panel.

While the bid should have been raised to Rs 5.50 crore (INR 55 million), Sharma mistakenly announced that DC had the highest bid for the player at the previous amount of Rs 5.25 crore (INR 52.5 million). Khaleel was eventually sold to DC for the same amount, however, it was Mumbai Indians who had first bid that amount for the Indian pacer.

The video of the gaffe from auctioneer Sharma has now gone viral on social media.

Also Read: Players go through walls for Dhoni, never heard anyone say they didn't like playing for CSK: Aakash Chopra

Delhi Capitals co-owner Grandhi's tactics at the mega auction became one of the major talking points on social media as he was accused of increasing the price of the players despite not having any concrete interest in them. However, the tactics seemed to have worked in DC's favour as they managed to build a strong squad covering the majority of the bases.