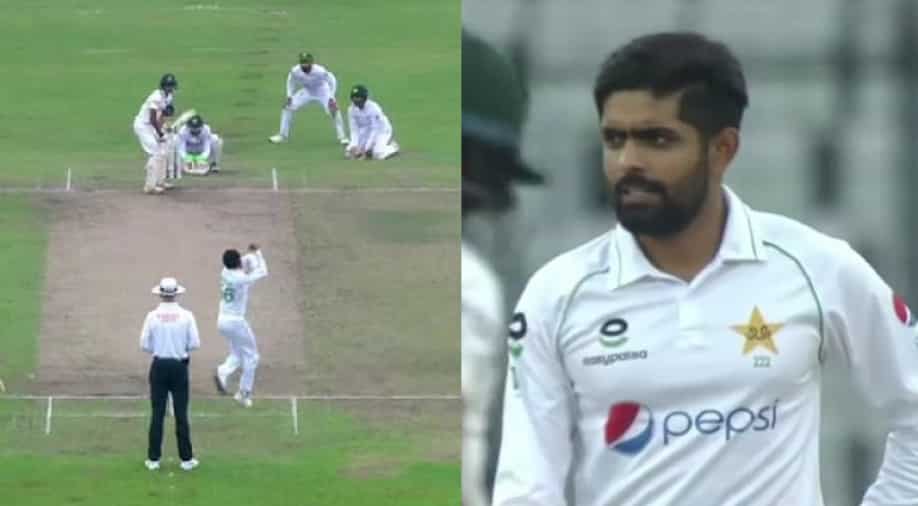 Pakistan skipper Babar Azam bowled for the first time in international cricket as he rolled his arms during the ongoing second Test between Pakistan and Bangladesh. He nearly got his maiden wicket in the game.

Pakistan took control of the ongoing second Test against Bangladesh in Dhaka on Day 4 of the game on Tuesday with quick wickets during the hosts' first innings. After rain washed out day 3's play in the Test match, Pakistan resumed their first innings from 188/2 and went on to add 112 runs on the board before declaring their innings on 300/4.

The bowlers then got Pakistan off to a stunning start as they kept dismissing Bangladesh batters at regular intervals to pile pressure on the hosts. Sajid Khan ran through the Bangladesh batting line-up with an impressive six-wicket haul. He dismissed both openers Mahmdul Hasan (0) and Shadman Islam (3) cheaply before bagging the wickets of Mushfiqur Rahim and Liton Das among others to leave Bangladesh reeling on 76/7 at stumps on Day 4.

Pakistan captain Babar Azam also decided to roll his arm during Bangladesh's first innings and bowled for the first time in his international career. Babar conceded a run off his over and nearly got the wicket of Taijul Islam, who edged one towards slips but survived as the ball didn't carry to the fielder.

Babar bowled just one over during the game and came close to taking his maiden international wicket. While it was the first instance of him bowling in an international game, the Pakistan captain has 12 wickets in 147 List A matches and 5 wickets in 72 First-Class games. He has also picked up 4 wickets in T20s.

Talking about the second Test between Pakistan and Bangladesh, Babar & Co. will be looking to pull off an unlikely win on the final day of the Test match on Wednesday (December 07). Bangladesh are currently trailing Pakistan's first-innings total by 224 runs and the visitors need only three wickets to bowl them out.

Babar can inflict follow-on on Bangladesh on Day 5 of the Test match to look for a win. If Pakistan can bowl Bangladesh out in their second innings on Day 5 without conceding any lead, it will be a stunning win for the visitors.