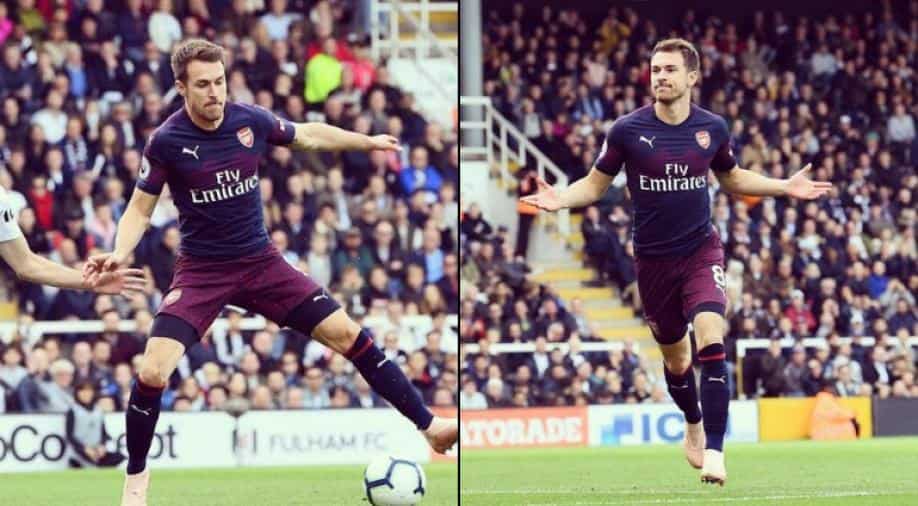 Aaron Ramsey netted a beautiful and well-constructed goal in Arsenal's 5-1 win over Fulham on Sunday, which is definitely a contender for goal of the season.

The wonder goal has proved why Ramsey's stay with the Gunners is important and why he will be such a loss if, as expected, he leaves the club when his contract expires at the end of the season.

The goal was conceptualised by the 27-year-old midfielder, who began and ended a wonderful free-flowing move, just 39 seconds after coming on as a 67th-minute substitute.

Earlier, Arsenal's manager Unai Emery remained tight-lipped about a new deal for Ramsey and a contract offer to the midfielder was withdrawn last month.

Irrespective of that, Ramsey showed his quality when he created and finished a stunning team move to help Arsenal to a ninth straight win in all competitions - their best run since April 2015.

First, he dinked the ball over a defender deep in his own half before running on to make two key headers around the halfway line to allow the push forward to keep its momentum.

Finally, he met Pierre-Emerick Aubameyang's low cross with a delicate flick with the inside of his boot to beat Marcus Bettinelli in the Fulham goal and conjure memories of the sort of goals Dutch great Johan Cruyff used to score.

What a team goal from @Arsenal @aaronramsey #Ramsey makes it 3-1! pic.twitter.com/FWphwcZ0i3

"The best performer for us is every player."

Although Emery has said he would like to keep Ramsey, but he is clearly not short of midfield options, with Alex Iwobi impressing before being replaced by the Welshman and Germany's Mesut Ozil to come back in after missing Sunday's game with an injury.

"I believe in us, we believe in our process but also we must keep taking confidence. I think we are in the first competition in the war. It is very difficult but we must prepare, continue improving and show big commitment," said Emery.