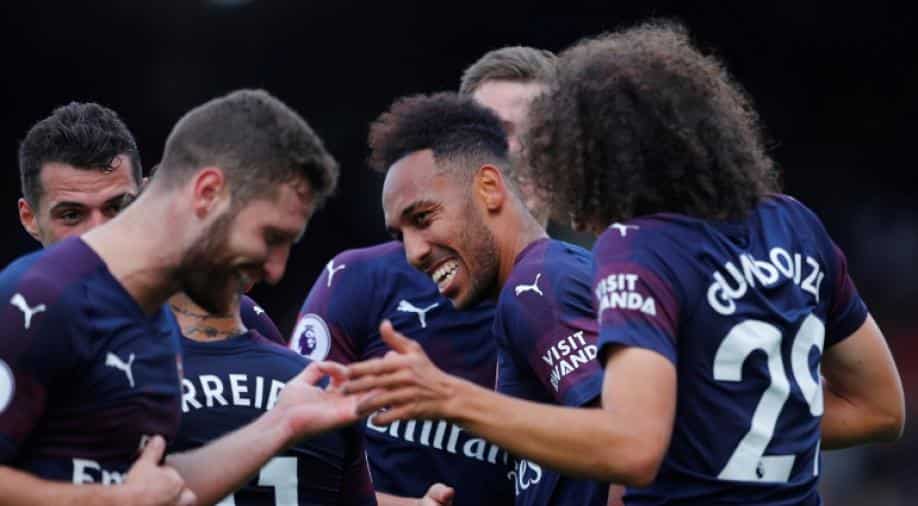 The loss leaves the Cottagers on the edge of the relegation zone in 17th place, while Arsenal move up to third above Tottenham on goal difference and ahead of Chelsea who play at Southampton later in the day.

Two goals from Frenchman Alexandre Lacazette, a wonderful back-heeled strike from Aaron Ramsey and two more from Pierre-Emerick Aubameyang gave Arsenal a 5-1 win over Fulham at Craven Cottage in the Premier League on Sunday.

Fulham pressed forward in the opening minutes as they looked for their first win over Arsenal since January 2012, and Argentine midfielder Luciano Vietto very nearly beat Gunners keeper Bernd Leno in the second minute.

Fulham's powerful Serbian forward Aleksandar Mitrovic also had a number of half-chances but was unable to get any clear shots in on goal, with perhaps his best attempt a thumped volley over the bar from outside the area.

Against the run of play, Lacazette opened the scoring in the 29th minute for Arsenal, collecting a pass from Nacho Monreal, spinning round past defender Tim Ream and rifling the ball low into the corner of the net from close range.

Fulham's Andre Schurrle levelled the score just before the break, chipping calmly over Leno for his third league goal since joining the Cottagers in the summer on loan from Borussia Dortmund.

But the visitors ran rampant in the second half, with three unanswered goals.

Lacazette scored his fourth league goal of the season before substitute Ramsey back-heeled in an exquisite third for the Gunners after a pass across the area from Aubameyang.

The Gabonese striker then took the game away from the home side with two more goals that left Fulham with the worst defensive record in the league by a distance, having let in four more goals than any other team.

"We worked very hard in the second half for this result," Arsenal manager Unai Emery told reporters.

"We need to be the same way in our matches: calm, finding our best performance and combination of players," he said when asked about the win, Arsenal's ninth in a row in all competitions.

The loss leaves the Cottagers on the edge of the relegation zone in 17th place, while Arsenal move up to third above Tottenham on goal difference and ahead of Chelsea who play at Southampton later in the day.

"We don't show the Premier League level, and this is our situation," Fulham manager Slavisa Jokanovic told reporters.

"Today we tried, we offered some positive signs, but it's not enough."