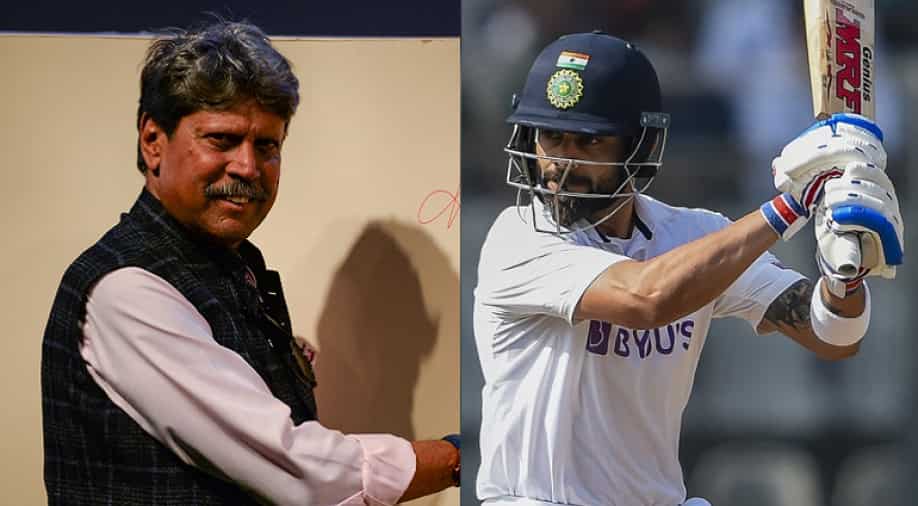 Kapil Dev wants Virat Kohli to give his ego for the sake of the team. Photograph:( AFP )

Legendary Indian cricketer Kapil Dev has urged Virat Kohli to give up his ego and put the country's interest ahead of him after giving up the Test captaincy of the team.

Former India captain and legendary all-rounder Kapil Dev has backed Virat Kohli over his decision to step down as the Test captain of the Indian cricket team. Kohli on Saturday (January 15) confirmed that he will not be leading India in Tests going forward after the team's 2-1 defeat in the recently-concluded Test series against South Africa.

Kapil, who led India to its first-ever World Cup triumph in 1983, believes Kohli did the right thing by giving up captaincy as he appeared to be under pressure ever since leaving T20I captaincy last year. Ahead of the T20 World Cup 2021 last year, Kohli had confirmed he will be stepping down as India's T20I captain post the showpiece event.

However, Kohli had expressed his desire to continue leading the team in both ODIs and Tests. In a controversial turn of events, he was removed as the ODI captain of the team in December last year with Rohit Sharma taking over as India's new limited-overs captain as a huge controversy erupted. The move also led to a public fallout between Kohli and the BCCI.

"I welcome Virat’s decision to quit the Test captaincy. He was going through a rough time ever since he gave up the T20 captaincy. He has looked tense in recent times, appeared to be under a lot of pressure. So giving up the captaincy was an option in order to play freely. He opted for that," Kapil told Mid-Day while sharing his views on Kohli's decision.

"He is a mature man. I am sure he must have thought hard before taking this important decision. Maybe, he wasn’t enjoying the captaincy. We have to support him and wish him luck," he added.

Virat Kohli should give up his ego: Kapil Dev

While Kapil backed Kohli's decision to step aside as the Test captain, he insisted the former Indian skipper should let go of his ego and play under a youngster for the larger good of the team. Citing his own example, Kapil said even he played under the likes of Sunil Gavaskar and Mohammad Azharuddin after leading India to a World Cup triumph in 1983.

"Even Sunil Gavaskar played under me. I played under K Srikkanth and Azharuddin. I had no ego. Virat will have to give up his ego and play under a young cricketer. This will help him and Indian cricket. Virat should guide the new captain, new players. We cannot lose Virat, the batsman…no way," Kapil concluded.