Let's all come together and vote for Sachin Tendulkar: Virat Kohli appeals to fans ahead of Laureus Sports Award 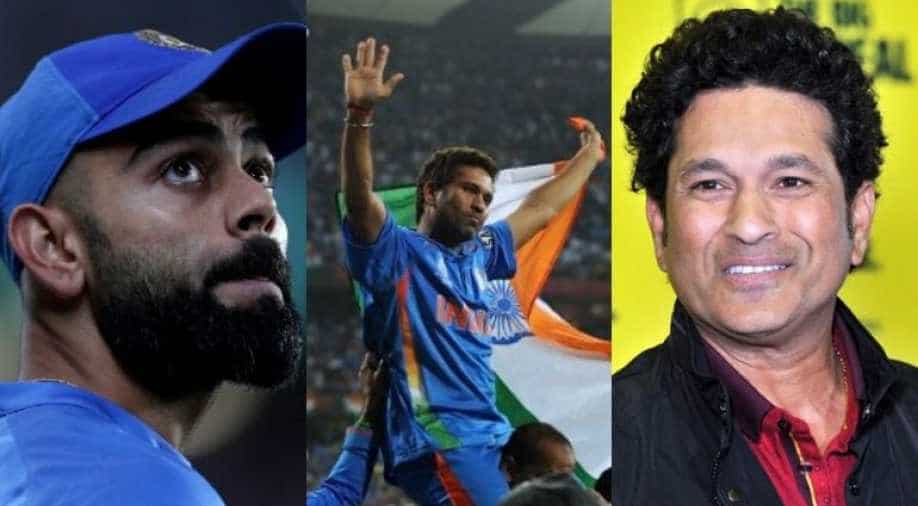 The moment that has been nominated by the Laureus Sports Foundation has titled it "Carried On the Shoulder Of A Nation".

Virat Kohli urged his fans to vote for Sachin Tendulkar, who has been nominated among five contenders for the greatest Laureus Sporting Moment 2000-2020 Award.

Virat took to Twitter, where he described the Indian batting legend as "A friend, teammate, mentor and icon".

A friend, teammate, mentor and icon. Let's all come together and vote for @sachin_rt paaji for the Laureus Sporting Moment 2⃣0⃣0⃣0⃣ - 2⃣0⃣2⃣0⃣ ✌ Click on the link below and vote now. 💪 @LaureusSport #Laureus20 https://t.co/wzzzldtJhS pic.twitter.com/PegECYFH2E

After 2011's ICC World Cup final win, Tendulkar was carried on the shoulders of his teammate. Virat (who was among those who carried Tendulkar), had said that "Tendulkar has carried the burden of the nation for 21 years; It was time we carried him."

The moment that has been nominated by the Laureus Sports Foundation has titled it "Carried On the Shoulder Of A Nation".

The foundation launched this category for public voting, where the winner is decided by fans' votes.

Sachin Tendulkar had been a key player for the Indian cricket team during his tenure for the Men in Blue (1989-2013) scoring 34,357 runs across all formats. He recently was a part of the 'Bushfire cricket Bash', where he coached Pontings XI, and also played an over for Ellyse Perry.

The list of nominees of the Sportsman of the Year include Lewis Hamilton, Eliud Kipchoge, Marc Marquez, Lionel Messi, Rafael Nadal and Tiger Woods.

Whether you've voted before or not, have your say in the Laureus Sporting Moment 2000 - 2020 final round 👉 https://t.co/qjasmsla86#Laureus20 #SportUnitesUs pic.twitter.com/qXqGfBcUZZ

In the 'World Sportswoman of the Year' category, Naomi Osaka, the first Asian tennis player to get to number 1 in world rankings is competing against Golden Ball and Golden boot winner Megan Rapinoe, gymnastic great Simone Biles, American sprinters Allyson Felix and Shelly-Ann Fraser-Pryce along with US skiing legend Mikaela.

The winner will be announced during the Laureus World Sports Awards Show in Berlin on February 17.