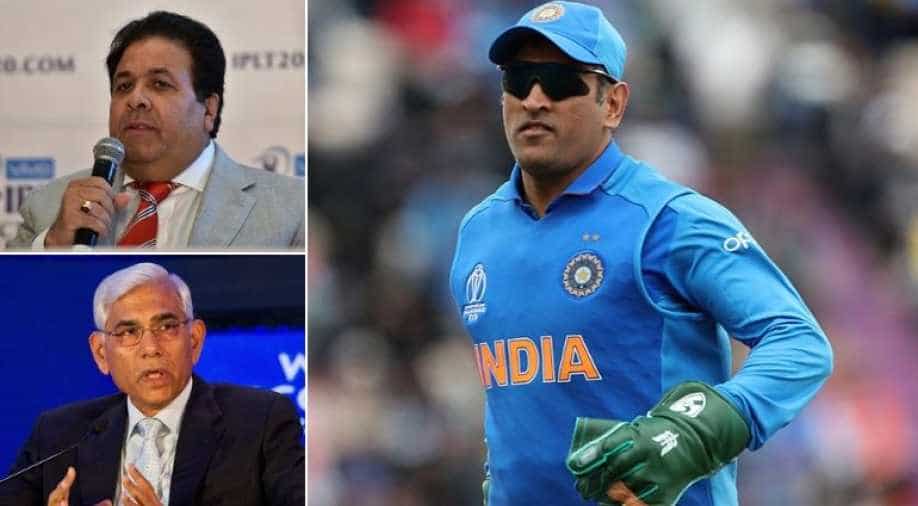 The International Cricket Council (ICC) on Friday put a rest to the ongoing glove row by turning down the BCCI's request to allow Dhoni to continue wearing the army insignia on his wicket-keeping gloves.

The apex cricketing body said, "The regulations for ICC events do not permit any individual message or logo to be displayed on any items of clothing or equipment. In addition to this, the logo also breaches the regulations in relation to what is permitted on wicketkeeper gloves.''

This debate started when the former India skipper, MS Dhoni was spotted sporting the Army insignia in India's opening match at the World Cup against South Africa, which the ICC objected.

The regimental dagger, which is the insignia of the Indian Para Special Forces does not adhere to the ICC's equipment and clothing regulations.

In pics | DhoniKeepTheGlove: Support pouring in from all and sundry

CoA chief Vinod Rai said that there is no question of breaking the ICC's norms and consequently, they will follow the cricket governing body's decision.

"Our stand is very clear, we will conform to ICC norms. This is not a religious or a commercial message but I find that ICC has not allowed other players also for this kind of thing. We don`t suppose to escalate, we will go by ICC's norms absolutely," Rai told news agency ANI.

On the other hand, IPL chairman Rajiv Shukla said the ICC should reconsider its stand regarding the army insignia worn by MS Dhoni on his wicket-keeping gloves.

"I think the ICC should reconsider its stand. Dhoni has not done anything, which amounts to violating the rules and regulations," Rajiv Shukla told news agency ANI.

MS Dhoni will not be seen wearing keeping gloves which had the dagger insignia on them when India take on Australia on June 9 at the Oval, London.