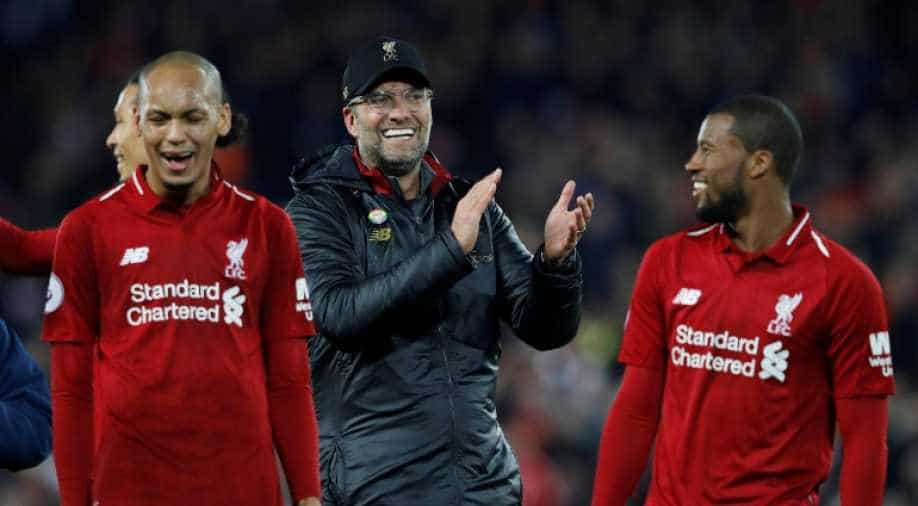 Liverpool manager Juergen Klopp applauds the fans as Georginio Wijnaldum and Fabinho celebrate at the end of the match. Photograph:( Reuters )

Klopp said that he apologised to Everton's manager Marco Silva for his actions.

Liverpool defeated local rivals Everton 1-0 after a goal in the sixth minute of stoppage time from Divock Origi, following a mistake from goalkeeper Jordan Pickford, n the latest edition of the Merseyside derby at Anfield.

Liverpool manager Jurgen Klopp responded to the late winner by running on to the pitch and hugging 'Reds' goalkeeper Alisson.

While addressing the media, Klopp said that he apologised to Marco Silva for his actions - a claim the Everton manager subsequently denied.

He said, "Immediately after the game I apologised to (Everton manager) Marco Silva, because, when we spoke to each other, and I, told him how much, I respect his work, because it's incredible, what he did with that team. They are just an outstanding side."

"Derbies are always difficult, but today it was a completely different difficult to the last few years. And... so, what Can I say about it? I didn't want to run, it was not my plan," he further added.

Virgil van Dijk's mis-hit shot looped up into the air and was dropping over the Everton crossbar before Pickford scooped it back into play, allowing Origi to score.

Chasing a first win at Anfield since 1999, Everton created the better of the openings in the first half, but found Liverpool goalkeeper Allison in inspired form.