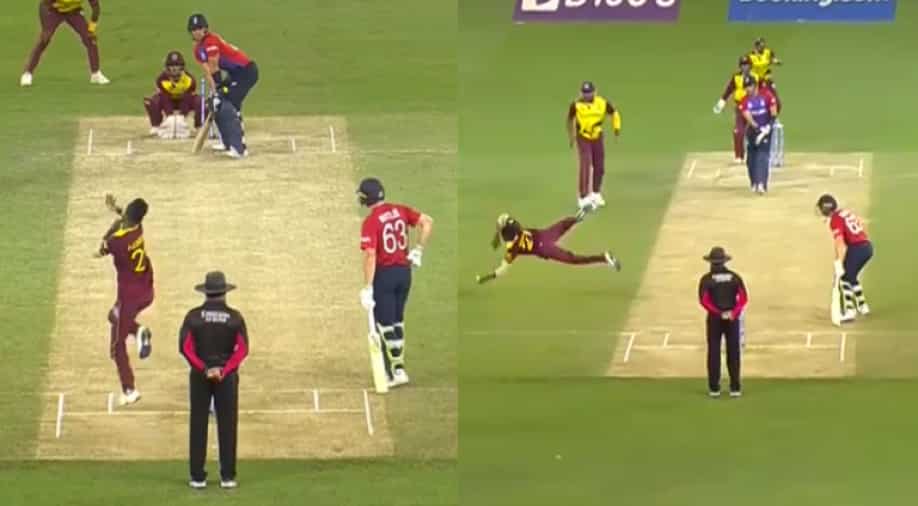 West Indies got off to the worst possible start in the ongoing T20 World Cup 2021 with a six-wicket loss in their opening clash against Eoin Morgan-led England at the Dubai International Stadium in Dubai on Saturday. West Indies recorded the third-lowest total in the history of the T20 World Cup as they were bundled out for a paltry 55 before England chased down the target with as many as 34 balls to spare.

While it was a disastrous outing for West Indies in Dubai, spinner Akeal Hosein manage to steal the thunder with a stunning diving catch to dismiss Jonny Bairstow during England's run-chase. Asked to chase down a low-key target of just 56 runs, England lost their first wicket in the 4th over when Ravi Rampaul got rid of opener Jason Roy before Bairstow was sent packing by Hosein.

The dismissal took place on the first ball of the seventh over when Hosein took a blinder off his own bowling to complete a caught & bowled dismissal of Bairstow. It was an incredible display of athleticism from the left-arm spinner who has already taken one of the catches of the tournament this year.

Talking about the game, England won the toss and opted to bowl first. West Indies got off to a shaky start as they lost openers Evin Lewis (6) and Lendl Simmons (3) cheaply before suffering a middle-order collapse to get bundled out for just 55 runs.

Spinner Adil Rashid was the pick of the bowlers of England with a four-wicket haul while Tymal Mills and Moeen Ali picked up a couple of wickets apiece. In reply, England too got off to a sluggish start but wrapped up the chase in 8.2 overs after losing 4 wickets to win by six wickets and get off to a winning start in the tournament.