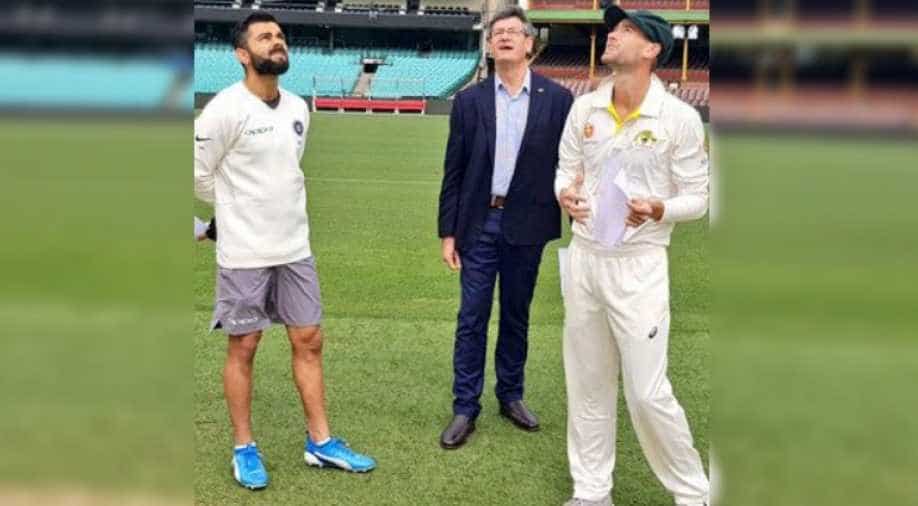 'Disgraceful and disrespectful... There was time captains used to wear Blazers during toss,' wrote a Twitter user.

Indian captain Virat Kohli was trolled by cricket fans for wearing shorts at the toss for the warm-up game against Cricket Australia XI ahead of the four-Test series here.

The opening day of the four-day non-first class match against an understrength representative side was washed out by torrential rain.

The picture of Virat Kohli and CA XI captain Sam Whiteman, which was captured during the toss, was tweeted by the official handle of BCCI.

Soon after that fans criticised Kohli for wearing shorts in the 'gentleman's game' and called it disrespectful.

CA XI have won the toss and will field first #TeamIndia pic.twitter.com/J8fb8BJp8x

Watching Virat Kohli going out to toss with shorts is nothing but disgraceful. I remember the legendary late ML Jaisimha in full whites when he became coach of Hyderabad team. He always felt one should respect the game. Period

"This @imVkohli bad attitude is showing no any respect for game and their legacy why @bcci @icc @accessonline n other cricket members think about this. Where is #sunilgavaskar who taunted in #Aisacup to Pakistani player for their cap??? What @imVkohli is showing," a twitter handle that goes by the name @VeeG48 wrote.

Another wrote, "Disgraceful and disrespectful... There was time captains used to wear Blazers during toss.... This behavior is absolutely unpardonable...."

The Virat Kohli-led tourists suffered a mini-collapse towards the end, losing their last five wickets for 11 runs to be dismissed for 358, but will be pleased to have got so much time in the middle for their top and middle orders.

While few fans came in support of the skipper.

The Test series begins in Adelaide on December 6, with further matches in Perth, Melbourne and Sydney over the following month.