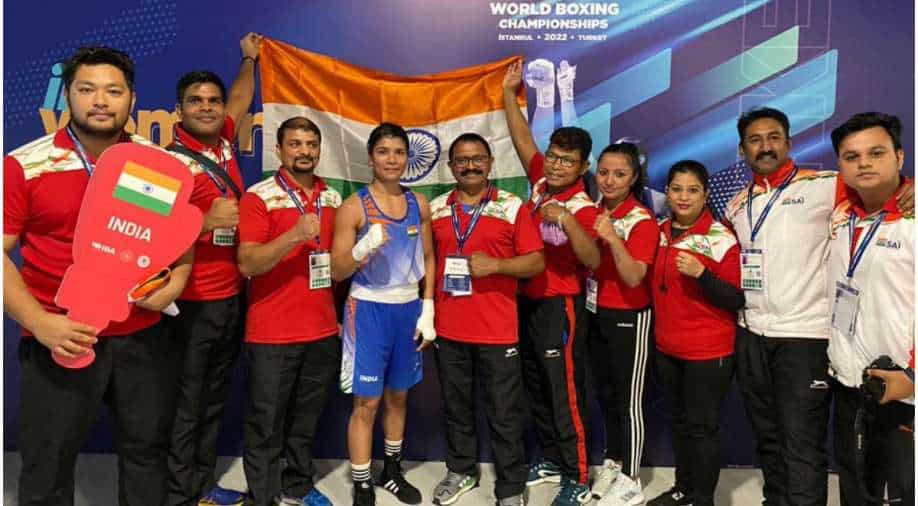 Twitterati has gone bonkers seeing the success of Nikhat Zareen, who is rising up the ladder in no time in the Indian sporting fraternity. Here are some of the reactions on social media platform following Nikhat's latest triumph:

The 25-year-old Nikhat Zareen continues to make giant strides in boxing. On Thursday (May 19), she created history by bagging a historic gold medal after beating Thailand's Jutamas Jitpong 5-0 in the 52kg final of the Women`s World Boxing Championships in Istanbul.

By virtue of this feat, Nikhat now joins six-time champion M.C Mary Kom, Sarita Devi, Jenny R.L and Lekha C. to become the fifth Indian woman boxer to win the world title. A lot of hope was riding on the youngster after her semi-final win over Brazil's Caroline De Almeida, which also came by the same margin, and Nikhat didn't succumb to pressure in the summit clash to end with an elusive gold.

Hence, Twitterati has gone bonkers seeing the success of Nikhat, who is rising up the ladder in no time in the Indian sporting fraternity. Here are some of the reactions on the social media platform following Nikhat's latest triumph:

…that’s some company to be in!

🇮🇳 boxers to win gold at the World Championships.

Reactions from some other verified accounts and prominent names are as follows:

Shining bright at the top of the podium is our new world champion- @nikhat_zareen 😍🌟#ibawwchs2022#IstanbulBoxing#PunchMeinHaiDum#Boxing pic.twitter.com/H4Fcul9KJx

Fist of Gold in Boxing ! 🥇Superwhistles to Nikhat Zareen on landing this feat with a punch! 💥🥊#WhistleForIndia 🦁💛 pic.twitter.com/xt0dGAih2b

What a win this is @nikhat_zareen Congratulations, World Champion 👏 pic.twitter.com/64k9Zv4eQt

Talking about the finale, it saw the best from Zareen as she was in top form and she used her technical acumen and covered the court to emerge the winner against her nimble-footed opponent. Nikhat managed to impress all the judges in the opening round by convincingly landing more punches than the Thai boxer. The second round was much more intense as Jitpong bounced back and clinched it 3-2. Needing to get just one judge on her side in the final round, the Indian boxer went all-out to eventually register a 5-0 unanimous decision in her favour and make heads turn in the country.