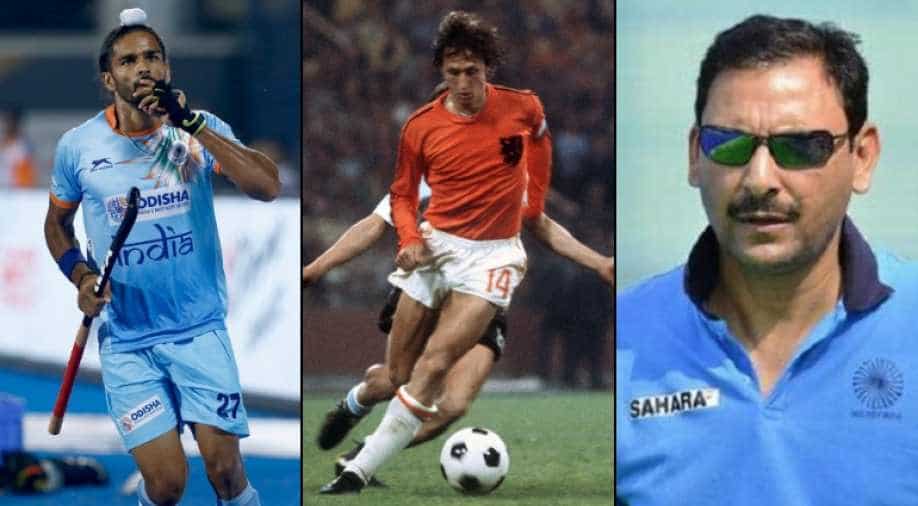 Indian team coach Harendra Singh and Akashdeep can take a leaf out of Johan Cruyff's total football strategy Photograph:( Others )

The astroturf killed India's game in the 80s as the European teams led by Germany, Australia, Netherlands took control of the game

Let's for a moment forget India's victory against South Africa, and imagine the Netherlands playing against Germany in the football World Cup in 1974, a tournament famous for the tactical approach called "total football".

In this new approach, no player has a fixed position - defender, sweeper, wingers all move up and down as the ball moves, confusing the opposition who don't know who to target. It was a tactic played to perfection by Johan Cruyff's Holland against Germany, but sadly the Orange shirts lost the final thus burying the flamboyant, free-flowing approach.

The beautiful game made "total football" famous, now India has the chance to adopt it and introduce "Indian elements" to potentially take the opposition by surprise. The new technique calls for shrewd organizational skill, pace and accuracy which have traditionally not been India's forte.

However, in this World Cup led by Manpreet Singh under coach Harendra Singh, India has the chance to surprise the top teams and the World. India has fallen off the radar in world hockey, the last the Indian team which won the World Cup was during the Emergency way back in 1975.

The astro turf killed India's game in the 80s as the European teams led by Germany, Australia, Netherlands took control of the game. India struggled with pace and their tendency to hold on to the ball and not adopting a fast-paced passing game like the Europeans led to defeats in the Olympics and several other lesser-known tournaments.

Suddenly, India wasn't feared anymore - a huge factor in sports. The loss of fear factor led successive Indian teams to lose confidence in themselves as they fell off the charts.

The Indian team hit an all-time low after the team failed to qualify for the Beijing Olympics in 2008 for the first time ever. The eight-time gold medallist could not go any lower.

India started from scratch, in the last two years the team has again started to perform, led by the junior team which won the junior World Cup under Harendra Singh, the current coach of the national team at the World Cup.

The new approach towards "total hockey" will not be easy as it will test the physical agility of players, a trait Indian players are not well known for be it hockey or cricket. It needs a power approach, much like the way Europeans play their game combined with the skill and artistry of Cruff's Netherlands.

It calls for dismantling the game in the mind and adopting a new, fluid approach in which every player is a defender and an attacker - a destructive strategy built to win matches.

Hockey itself has changed over the years, the quarters and substituting players has revolutionised the game in the era of T20 cricket and quick-fix solutions. The game is waiting for a whole new approach, and what better than the inventors of the game coming up with an ultra modern approach turning the European style on its head.

In this, the frontline and defenders would have to be collapsed to keep pushing the ball up and whenever the opposition counter-attacks, players fall back into defensive positions.

India in this World Cup has little to lose except that they are playing at home in front of a crowd which views hockey as a game belonging to the bygone era when India was the world champion, a story which now seems a world away from reality.

An Indian defeat in this World Cup will once again take away fans which the game can ill-afford. The need of the hour is a new, dynamic style from the creators of the game.

Time for India to stand up and be counted.