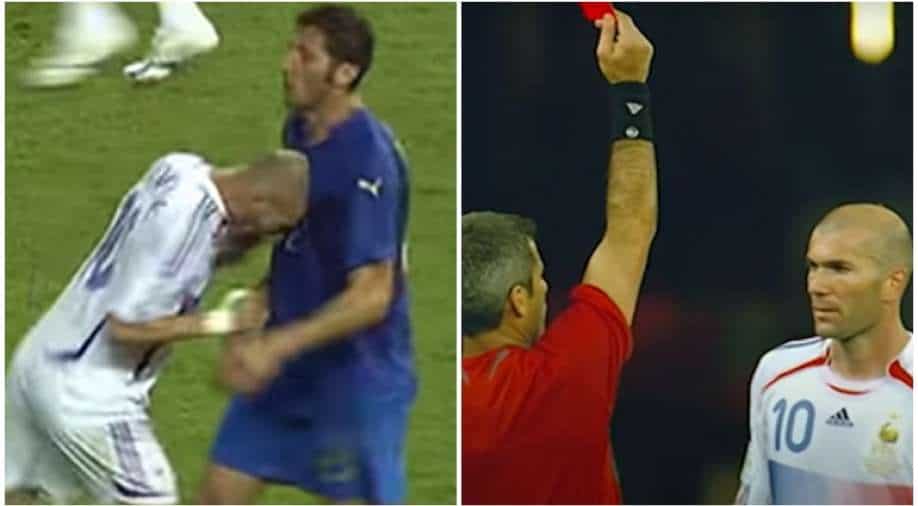 During the final moments of the 2006 FIFA World Cup, France's captain Zinedine Zidane's infamous headbutt to Marco Materazzi made heads turn. Here's a throwback video of the same:

Zinedine Zidane remains one of the biggest names in world football. After a glittering career for France, having led them to their maiden World Cup title in 1998, the talismanic footballer had retired two years before the 2006 FIFA World Cup. However, the star player returned to the field and even led the national side in the 2006 edition.

Zidane, aged 34 in 2006, led from the front for France in the mega event which was held in Germany. He was in emphatic form and almost single-handedly took the team to the summit clash, where they faced Italy. Prior to the finale, Zidane was in rollicking touch as he scored in the Round of 16 win over Spain and also in the semi-final versus Portugal. In addition, he had assisted Thierry Henry's quarter-final winner against Brazil.

While Zidane's performances earned him the Golden Ball award in the 2006 edition, his infamous headbutt to Italy's Marco Materazzi drew maximum eyeballs and served as a huge jolt to his overall showing in the tournament.

The headbutt came in the final moments of the regulation time, with both France and Italy tied at 1-1. After scoring the first goal in the final, Zidane-led France were tied at 1-1 with Italy courtesy Materazzi's strike. Thus, there was tension in the middle.

What unfolded from thereon ended Zidane's international career in an absurd and most unthinkable manner. The war of words with Materazzi led to the French captain losing his cool and going for a headbutt; leading to the Italian's injury. As a result, he was shown the red card; ending his international career all of a sudden. Here's a throwback video of how things panned out during the 2006 FIFA WC final for Zidane:

ALSO READ | Cigars, BMW cars and luxury villa: Diego Maradona's belongings up for auction a year after his demise

Quoted by Italian media, Materazzi spilled the beans on the Zidane headbutt while taking up fans' questions on Instagram live last year. "I wasn't expecting it in that moment. I was lucky enough that the whole episode took me by surprise because if I had expected something like that to happen and had been ready for it, I'm sure both of us would have ended up being sent off," Materazzi said.

"There had been a bit of contact between us in the area. He had scored France's goal in the first half and our coach (Marcello Lippi) told me to mark him. After that first brush between us, I apologised but he reacted badly. The late tackles, altercations and exchanges continued until 110 minutes, when things reached a head. After the third clash, I frowned and he retorted: 'I'll give you my shirt later'. I replied that I'd rather have his sister than his shirt," he concluded.

Materazzi-starrer Italy had the last laugh following the Zidane headbutt. The match went down to the wire, i.e. to the penalty shootout where Italy triumphed over the opposition by 5-3. Materazzi had a memorable outing, barring the headbutt from Zidane, as he scored his second goal in the penalty.