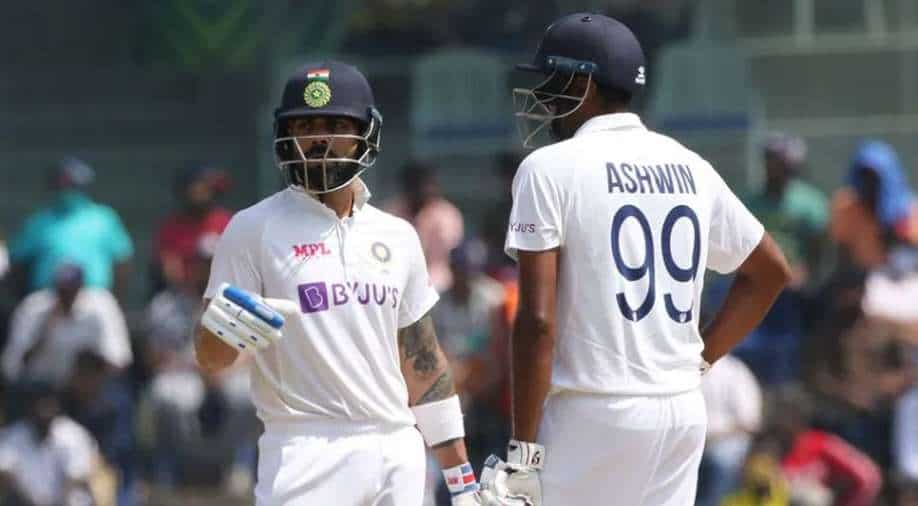 Indian skipper Virat Kohli and Ravichandran Ashwin on Monday produced batting masterclass on a 'beach' Chennai pitch as the duo scored a half-century each to extend India's lead in the second innings to over 350 runs.

Indian skipper Virat Kohli and Ravichandran Ashwin on Monday produced batting masterclass on a 'beach' Chennai pitch as the duo scored a half-century each to extend India's lead in the second innings to over 350 runs.

While England batsmen were outplayed by the Indian bowlers on Day 2, Ashwin and Kohli showed the visitors how to bat on a 'rank turner' as the duo tackled the English spin duo of Jack Leach and Moeen Ali with ease.

With former England cricketers such as Michael Vaughan and Matt Prior criticising the Chennai pitch on Day 2 of the match after England were bowled out for a paltry 134, the Indian batters, especially Kohli and Ashwin produced batting of the highest caliber to register their respective half-century.

He may not get a 100 but this @imVkohli innings has been an masterclass on this pitch ... its already 100 balls of batting that all coaches should show players on how to play on a Beach ... #INDvsENG

It’s entertaining cricket as things are happening all the time but let’s be honest this Pitch is a shocker .. Not making any excuses as India have been better but this isn’t a Test Match 5 day prepared Pitch ... #INDvENG

Twitterati celebrated half-centuries of Kohli and Ashwin as India look on verge of winning the second Test to equalise the series 1-1.

He’s the greatest batter in the game of cricket playing right now - @imVkohli!

Sometimes in Test Cricket a 50 you make in challenging conditions and situation will be more satisfying than a 200 you make on a flat pitch. I am sure this is one such innings for @imVkohli A master class on how to play on a turning track. #INDvsENG pic.twitter.com/8NYs7fTMAk

Both was tough pitch to bat on and best of the best stands tall for India - Virat Kohli.

Kohli is majestic. This is a masterclass in how to bat on a ploughed field. #INDvENG

Ash anna showing england batsman how to bat on turners rather than crying pic.twitter.com/Od7in2K9xw

Not only did Kohli and Ashwin shut critics of the Chennai pitch with their quality batting display, former Indian skipper Sunil Gavaskar also lashed out at the critics for unnecessary slamming the quality of the strip in Chennai.

"We saw how Rohit Sharma getting 150, and yesterday he was getting close to ball and batting. This criticism (on pitch) is pretty warranted," Gavaskar said on Star Sports.

"Some of them are saying that - but you have a seaming pitch in England. Australia get dismissed for 46 - the ball keeps seeming all throughout. No one talks about that. It's always about Indian pitches, and when the ball starts to turn, people pose a problem," he added.

With Kohli and Ashwin still batting, the Indian duo would be looking to convert their 50+ scores to a century to make this Test even more special, moreover in front of the fans.