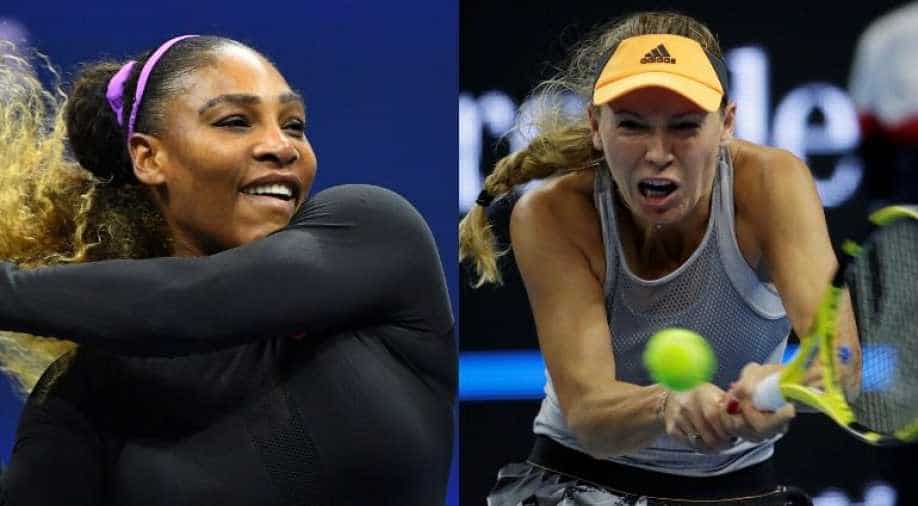 Serena Williams of the USA and Caroline Wozniacki of Denmark. Photograph:(Reuters)
Follow Us

Williams needed two hours to outlast fellow American Christina McHale with a 3-6 6-2 6-3 victory, while Wozniacki, who is playing her penultimate tournament, fought back to overcome a tenacious Lauren Davis 6-1 4-6 6-4

Top seed Serena Williams and Caroline Wozniacki ensured the Auckland Classic retained their two main drawcards as they battled to second round victories on Thursday, although promising teenager Coco Gauff was knocked out.

Williams needed two hours to outlast fellow American Christina McHale with a 3-6 6-2 6-3 victory, while Wozniacki, who is playing her penultimate tournament, fought back to overcome a tenacious Lauren Davis 6-1 4-6 6-4.

Gauff, however, was upset by Germany's Laura Siegemund 5-7 6-2 6-3 in a two-hour, 14-minute match that opened Thursday's action on the main court at the Auckland Tennis Centre.

Siegemund will now meet Williams, who struggled against the 86th-ranked McHale, who had not beaten the 23-times Grand Slam champion in their three previous matches.

McHale kept the 38-year-old off-balance with clever use of angled returns and chased down everything hammered back at her.

Williams only seized control of the match in the fifth game of the decider when she broke serve and told reporters that she had been angry with her play and was determined not to repeat her early Auckland exit in 2017.

"I think today I just got mad," Williams said of what had sparked her turnaround on Thursday. "Honestly, I said I wanted to win more than one match here in New Zealand.

"I literally thought about that (2017 tournament) and sometimes it's the craziest things that get you motivated."

Williams crashed out in the second round in Auckland in 2017 with an erratic performance she put down to the swirling winds and she left New Zealand in a hurry stating she was looking forward to better weather in Australia.

She said last week, however, that the early stages of her pregnancy in 2017 had badly affected her and she had no idea at the time why she was angry at everything.

Wozniacki, who is retiring after the Australian Open, had romped to an early advantage but when Davis saved serve early in the second set she changed the momentum of the match.

The Dane, however, seized her chances on the crucial points in the decider and broke Davis in the ninth game then served out for the match.

"I thought that we both played really well," Wozniacki said. "I just kept digging in and I got lucky in the end."

Wozniacki will now meet Julia Goerges, who has won the Auckland title the last two years, in the quarter-finals after the German produced a clinical 6-3 6-2 victory over Switzerland's Jil Teichmann.