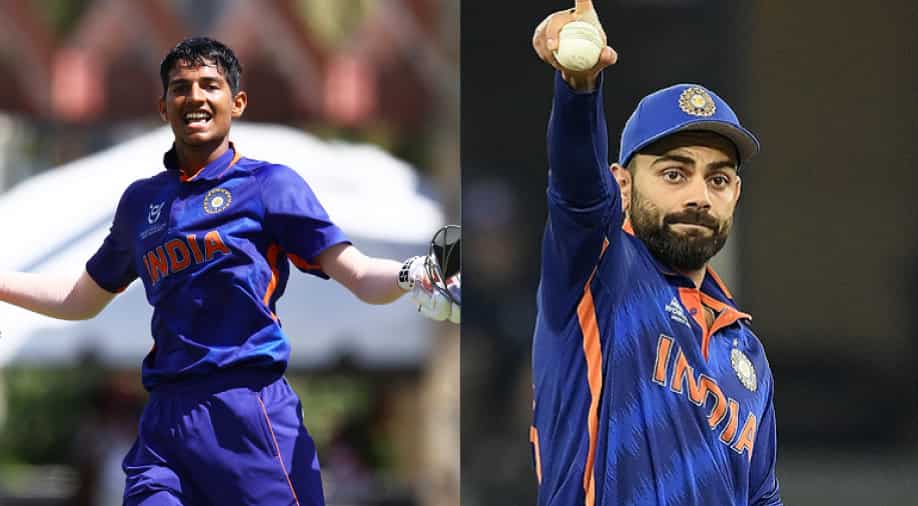 Virat Kohli spoke with the India U-19 team ahead of the final against England. | Photo - BCCI/AFP | Photograph:( Others )

India U-19 skipper Yash Dhull revealed what Virat Kohli told him and his teammates in a virtual interaction ahead of the U-19 World Cup final against England.

The Yash Dhull-led India U-19 team will be looking to maintain India's dominance in the ongoing ICC U-19 World Cup 2022 when they lock horns with England in the high-pressure final on Saturday. Both India and England have been unbeaten so far in the competition and will be looking to clinch the trophy by winning the summit clash.

The blockbuster final will be played in Antigua. Ahead of the big clash, former India captain Virat Kohli interacted with the members of the Indian U-19 team and lifted their morale. Kohli, who is a U-19 World Cup-winning captain himself, shared 'valuable tips' with the youngsters and motivated them to give their all in the final.

India U-19 skipper Yash Dhull revealed what Kohli told him and his teammates ahead of the final. Speaking at the pre-match press conference ahead of the final against England, Dhull said it was nice to have Kohli speak with the squad.

"Virat Kohli gave us his best wishes for the final. We got confidence from that, the morale increases when a senior player like him talks to you. He told us how we can execute our plans and he told us about the basics of the game, it was a nice interaction with him," Dhull told reporters during a virtual presser.

India have been one of the most successful teams in the history of the U-19 World Cup with eight final appearances and four trophies under their belt. Kohli had led India to a title triumph at the 2008 showpiece event. Dhull & Co. will be looking to extend India's dominance further in the competition and clinch a record-extending fifth title on Saturday.

India are heading into the final on the back of a huge win against Australia U-19 in the semi-final. India rode on a magnificent century from skipper Dhull, who scored 110 runs off 110 balls to help the team post a strong total of 290 runs in fifty overs.

Indian bowlers continued their good show in the tournament as Vicky Ostwal picked up a three-wicket haul, while Nishant Sindhu and Ravi Kumar shared four wickets between them to bundle out Australia for 194 runs in 41.5 overs and help India secure a comfortable win.

India will be looking to maintain their unbeaten run when they take on England in the final on Saturday. Dhull said the team's spirit is high and they are looking forward to locking horns with England in the summit clash.

"The morale is high, everyone is excited about the game. We will enter the contest with a positive frame of mind. England played a close match against Afghanistan, we will make our own game plans. We will look to carry our form into the final. Our spinners are nice, we will look to execute our plans," Dhull said.