Serie A: Roma knocked out of third place with defeat at Parma 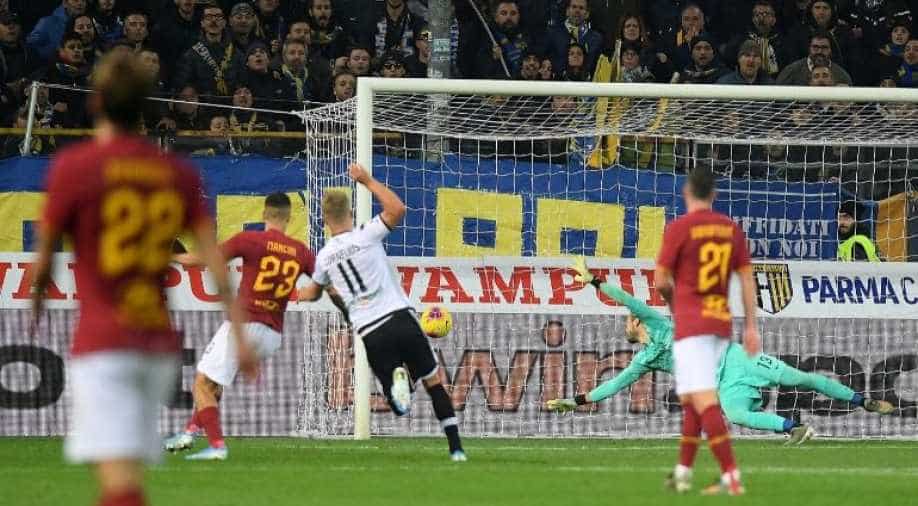 Roma were overhauled by free-scoring Lazio, who beat visiting Lecce 4-2, and Cagliari, who hammered Fiorentina 5-2 at home.

As Roma lost third place in Serie A when they slumped to a 2-0 defeat at Parma after Mattia Sprocati and Andreas Cornelius grabbed second-half goals on Sunday to end the visitors' six-match unbeaten league run.

Roma, playing three days after a Europa League defeat by Borussia Moenchengladbach, nearly went ahead midway through the second period when Aleksandar Kolarov rattled the woodwork with a free-kick and Javier Pastore's effort from the rebound was brilliantly saved by Luigi Sepe.

Instead, Sprocati fired Parma ahead from Riccardo Gagliolo's cross in the 68th minute and Cornelius added a second on the break with the last move of the match.

Roma were overhauled by free-scoring Lazio, who beat visiting Lecce 4-2, and Cagliari, who hammered Fiorentina 5-2 at home. Both have 24 points, followed by Atalanta and Roma on 22, Napoli with 19 and Parma who are eighth on 17.

Serie A leading scorer Ciro Immobile took his tally to 14 this season by converting a penalty for Lazio.

Sergei Milinkovic-Savic put Lazio back in front in the 62nd minute but then gave away a penalty five minutes later.

Khouma Babacar saw his effort saved by Thomas Strakosha and although Gianluca Lapadula put the rebound in, it was disallowed for encroachment.

Immobile made no mistake when Lazio were awarded a penalty to make it 3-1 and Correa then got his second for the hosts before Andrea La Mantia pulled one back for Lecce.

Udinese goalkeeper Juan Musso saved a penalty from SPAL substitute Andrea Petagna in the eighth minute of stoppage time to rescue a 0-0 home draw for his side as the visitors moved off the bottom of the table.

Claudio Ranieri's Sampdoria also managed a 0-0 draw at home to Atalanta who had Ruslan Malinovskyi sent off for a second bookable offence in the 74th minute.