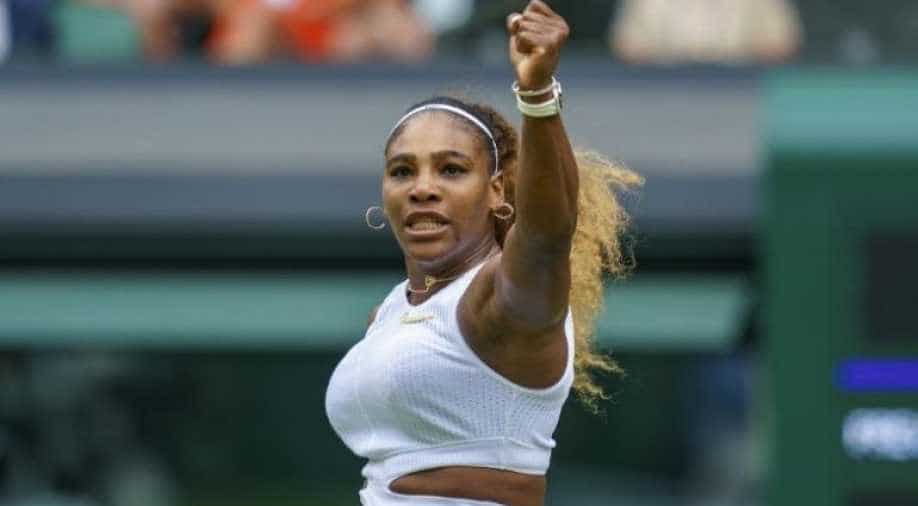 Riske absorbed every last punishing blow from the seven-time champion, while her own lightweight jab inflicted some early pain and then levelled the see-saw encounter at 1-1

Serena Williams clubbed her way into the Wimbledon semi-finals, draining the last drop of fight from fellow American Alison Riske before sealing a 6-4, 4-6, 6-3 win in a rip-roaring Centre Court contest on Tuesday.

For two sets, Riske absorbed every last punishing blow from the seven-time champion, while her own lightweight jab inflicted some early pain and then levelled the see-saw encounter at 1-1.

Williams' blows, however, became too frequent and too heavy in the final games, with the weaponised serve pushing the world number 55 Riske back on her heels, while her return worked like an old slugger's right-hook.

Having knocked out world number one Ash Barty in the last round and having spent over nine hours on court en route to the quarters - the longest path to the last eight of anyone since 2011 - Riske had shown a streak of pure Pittsburgh steel.

But Williams, who is hunting down a record-equalling 24th Grand Slam singles title, is tennis tungsten, and recovered superbly from a brief wobble in which she lost the second set and fell a break behind in the third.

"I just needed to fight," said Williams. "She was not giving it to me. I needed to step up and take it. That's what I had to do."

She eventually charged over the finish line after more than two hours on court, bringing up match point when Riske netted a forehand and completing the job with her 19th ace of the match to set up a clash with either Johanna Konta or Barbora Strycova.

While the women's game is often exalted as being wildly unpredictable, Williams remains the exception to the rule and Tuesday's win secured her a 37th Grand Slam semi-final appearance.

She came into the quarters having won 96 singles matches at the All England Club, while the other seven players left in the draw had won 80 between them.

The discrepancy between Williams' achievements and those of Riske could not have been more stark.

The 29-year-old was playing her first Grand Slam quarter-final in her 30th major and had accumulated around $85 million less in prize money than Williams.

Yet the Pittsburgh native feels at home on grass and, with 11 of her 19 Grand Slam match wins coming at Wimbledon, she was never going to be a pushover for Williams, who is still feeling her way back after a niggling knee injury had limited her court time since the Australian Open in January.

Riske struck first, breaking in the third game before Williams had really got her legs into gear, but a 3-1 advantage was quickly wiped out as the 11th seed won five of the next six games to take the set.

The wild swings of momentum were briefly halted at the start of the second as the match went with serve until Williams lost hers in the ninth game.

In the blink of an eye she had lost the set and been broken again in the first game of the decider with the Centre Court crowd sniffing an upset.

The advantage then swung from player to player as Williams seized back the initiative to go 3-1 up and then seemed powerless as Riske moved her around the court, forcing a string of errors from the former world number one's racket.

Midway through the set, as the wind played havoc with her hair, Williams decided enough was enough, in more ways than one.

Pulling her hair into the tightest of buns at the changeover, she went about finishing off Riske with punishing efficiency.

"I just needed to get it out of the way, put the business bun up and just get to business," she said.

She put menacing pressure on the Riske serve, bringing up break point, before a double fault gave Williams a 5-3 lead, an advantage she was never going to relinquish.